Steve Relyea
Friday, May 31, 2019
Professionals from Ted Johnson Propane Co. (Baldwin Park, Calif.) recently introduced local college students to the propane industry and the career opportunities it offers. Owner Julie Johnson delivered a classroom presentation at their school and then, the next day, she and operations manager John Weigel led students on a tour of the company’s bulk plant. 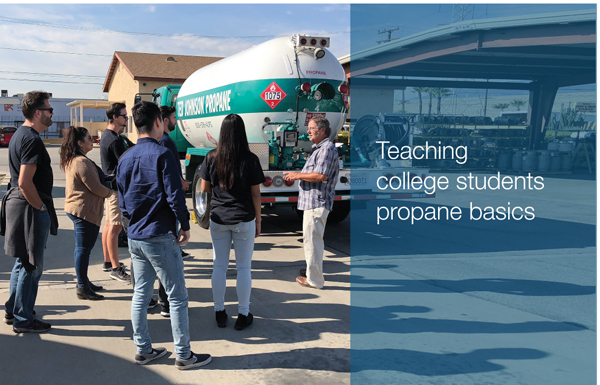 Johnson’s presentation to the Operations Management Society and Council of Supply Chain Management Professionals at California State Polytechnic University, Pomona (Cal Poly Pomona) lasted 45 minutes. Her presentation began with a sort of “Propane 101”—what it is, how it is produced, and how it is distributed. For these particular student organizations, a slide from NPGA showing the propane supply chain was especially helpful. Johnson also covered propane’s role as an emergency fuel, its clean-running qualities, and its role in tomorrow’s energy. “We have to break it down so people outside the industry can understand it—even regulators,” she told BPN after the event.

About 35 students attended the presentation. Johnson found that some students knew about propane’s applications in barbecues, generators, and jewelry making. As far as a career, “energy wasn’t on anyone’s radar,” she commented. “One student said he didn’t realize there was a future in energy.”

She also told the students about the ways propane is used on the campus of Cal Poly Pomona. The school has forklifts and shuttlebuses that are fueled by propane. The school’s Rose Parade float, a project completed in conjunction with the school’s Central California campus, Cal Poly San Luis Obispo, also runs on propane.

The bulk plant tour was held the following day. Eight students from the previous day’s event made the drive to the Ted Johnson Propane facility in Baldwin Park. The tour began with a presentation by Weigel. He pointed out that the company picks up propane at one of a few local refineries, transports it to load the tanks at its own bulk plant, and then delivers it with its own smaller trucks. He explained that the company may fill customer tanks, fill forklift tanks, or exchange tanks. There are parts of Los Angeles where bobtails can’t go, so there they can only do exchange tanks. The company also sells autogas and provides maintenance and repair for autogas-fueled vehicles. 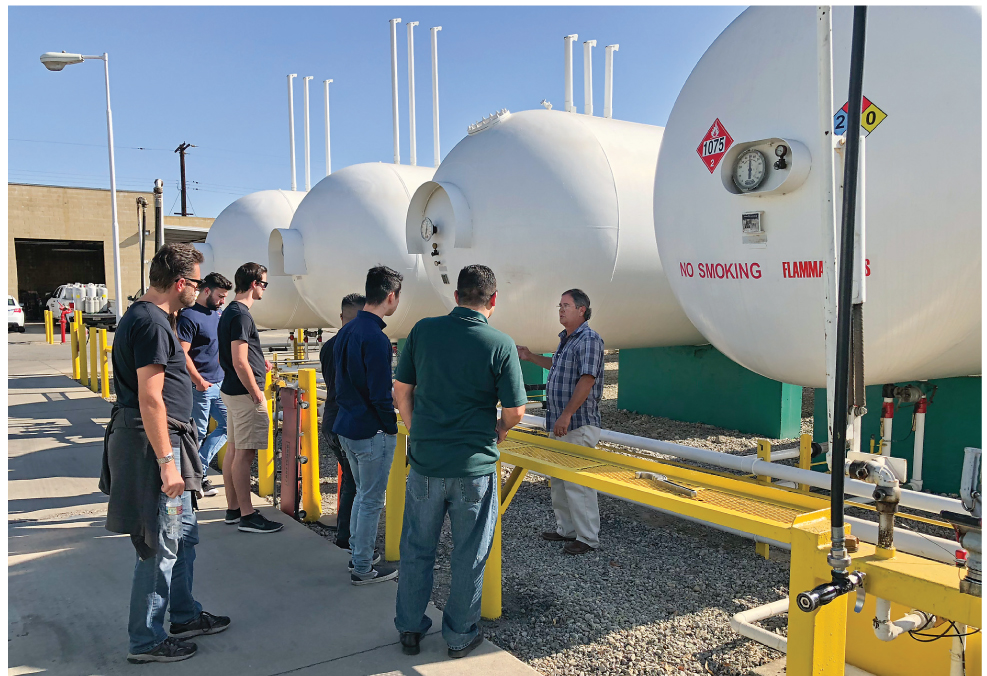 APPLICATIONS IN L.A.
None of the students participating in the tour lived in homes with propane, so Weigel explained that there are communities in the mountains around Los Angeles that are beyond the mains and rely on propane. He added that electrical power in the area can be irregular, so many celebrities living in and around L.A. keep propane-fueled generators on hand so they don’t have to go without power.

Weigel noted that the company has 150,000 gallons storage capacity at the bulk plant. He said company founder Ted Johnson put that in place in the 1970s and they were grandfathered in. A propane marketer in the area couldn’t do that today; they would be lucky to have 30,000 gallons capacity because the local government now wants tanks farther out from town. There has never been a problem with the tanks, he noted, but that’s the way it is.

Since these students were members of organizations focused on distribution, Weigel described that aspect of the business. He said the company has its own transport, bobtails, and cylinder exchange trucks. Each delivery vehicle drives about 100 miles per day. He also described the many licenses that a propane marketer must have and the importance of keeping them current. 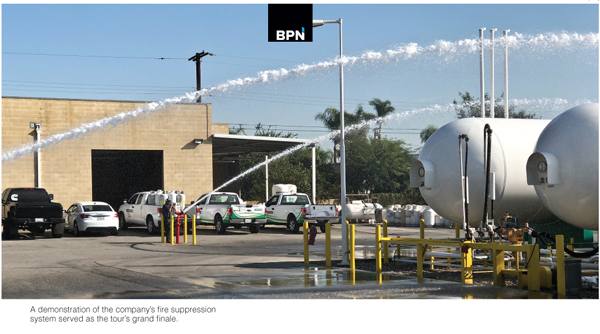 SAFETY IS NO. 1
Safety is the company’s No. 1 priority, he told the students. Hiring the right people is the most important contributor to that, so the company “hires slow and fires fast.” By the time a new employee has been at work 90 days, the employer will know if they fit the company’s culture. “If you just hire warm bodies,” he said, “you’re going to end up with an accident.”

Weigel then described the 90-day onboarding process for new employees. “We prefer to hire someone who knows nothing about propane, so we can train them our way,” he said. New employees start in the yard and become expert in all aspects of propane. They then accompany a driver making deliveries; the driver chosen for the first part of this process was selected because he has shown he has the patience, Weigel said. Later, the new hire may make deliveries with other drivers to see different areas and customers the company serves.

Following Weigel’s presentation, he and the students went outside to tour the bulk plant. He first showed the students the drive-off protection and the emergency shut-off that can close one tank or all the tanks. He also explained relief valves that allow propane to safely vent, even in the case of the wildfires recently seen in California.

Students were invited to ask questions at any time. They asked: Do you take inventory of the tank levels from outside or inside the office? Outside, manually. What is the industry standard for product loss? One-half of one percent. Why are there chairs between the tanks? For the person who watches as the bobtails are filled. 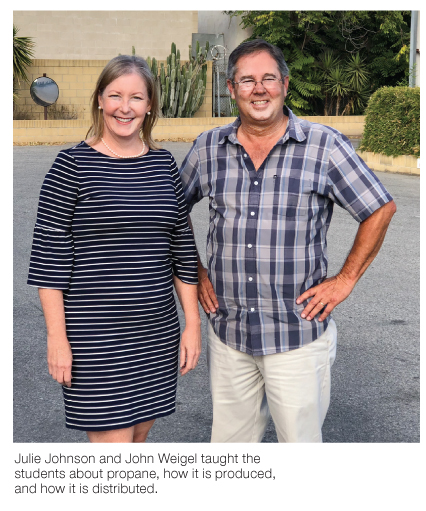 They were then shown one of the bobtails. Weigel told the students that the company currently has five vehicles running on propane autogas and intends to add more and phase out diesel. “If we are going to sell autogas, we have to lead by example.” He then started up an autogas-fueled bobtail, let it idle, and noted how quiet it is compared to diesel.

A GREAT OPPORTUNITY
Weigel asked the students if they would like to drive the bobtail. One hand quickly went up. After this first student had driven a short circle inside the plant, he exited the vehicle saying, “It’s like riding a bike—a really big bike!” The other students had been a little hesitant, but grew more confident as they saw others drive the bobtail. One by one, they all got in the bobtail and drove the same short route. “That was fun! Are you hiring?” said one. Weigel later told BPN, “Once one student does the drive, they all will—especially after you honk the horn!”

The tour closed with a demonstration of the company’s fire suppression system. Weigel and Johnson explained that the system is renowned among first responders and they have demonstrated it for professionals who have visited the facility from around the world. As the hoses sprayed the tanks, Johnson told the students, “This is our grand finale!”

After the classroom presentation and the bulk plant tour, Johnson told BPN, “It was a great opportunity to educate college students about propane, whether they go into the industry or not.” — Steve Relyea