Thursday, September 15, 2016
In David Kennedy’s career of working on propane autogas vehicles, he has experienced the difficulties involved when a valve or other component inside a vehicle’s propane tank fails. “Getting into the tank and actually working on the component takes a major effort,” said Kennedy, who is director of autogas design for Blossman Gas (Swannanoa, N.C.). From the start, he wanted to provide something so that employees could safely work on those propane tanks. 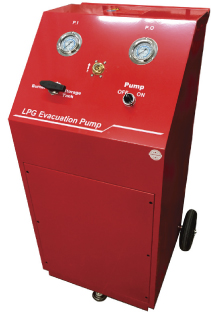 Kennedy and his team at Blossman believe they have found the answer to the problem. In July, the company released what it is calling the Autogas LPG Evacuation Pump, which it says can evacuate an OEM LPI vehicle tank, equipped with a fuel pump, filled with 44 useable gallons, to 0 PSI tank pressure in only an hour and a half. And that’s done without venting any propane into the atmosphere. According to the company, autogas fleets and trained autogas technicians now have “a service tool available that allows them to safely work on their vehicles on their own timelines.”

Blossman Gas notes that the pump is the latest addition to its catalog of safety-minded advancements, which also includes products such as the ultra-low-emission Staubli nozzle.

To further illustrate the safety aspects of the new product, Kennedy provided a scenario in which an OPD valve on an autogas tank fails. In that case, a service staff member can’t remove the valve until all liquid and vapor pressure from the tank is removed. Before coming to Blossman Gas about three years ago, Kennedy worked on gasoline-fueled vehicles and had experience with equipment that drew fluid out of the fuel tanks. After joining Blossman, he began looking for similar methods for propane autogas vehicles.

“There had to be some way to pull the liquid out of the propane tank and pull all the vapor pressure off the tank so you can get in and service it,” he explained.

Many times, when fleet managers need to service propane vehicles, they contact their propane suppliers for help in evacuating liquid and vapor from the tank. That increases vehicle downtime. Some fleets have been known to utilize a tank’s 80% fixed liquid level gauge to vent product into the atmosphere. “It’s not really acceptable for a fleet shop or a fleet manager to go out and let the truck vent off its fuel for two days,” Kennedy said. “It’s not really safe, and you’re losing all that gas.”

The machine will evacuate all the liquid out of the propane tank through the liquid service valve. Once that is finished, it will begin pulling the vapor out of the tank, all the way to negative pressure, through that same liquid supply valve.

“That effectively removes all the propane out of the tank,” Kennedy said. The technician can then remove the bad valve, fuel pump, or other defective component. “This is without venting into the atmosphere and without burning off any of the propane.” Some technicians previously performed the evacuation function in a manner similar to evacuating propane from a railcar with a compressor, which Kennedy described as a “very time- and labor-intensive process” that required a high skill level. The Blossman product performs the task with one single connection, he stated, adding that an operator doesn’t have to be a propane professional to perform the function — a trained autogas service technician should easily be able to operate the machine.

Blossman listed several benefits of the pump, including that it is completely air-operated, “reducing any ignition sources for safety.”

Utilizing air to power the pump, “There are no sources of ignition in the unit at all,” Kennedy stressed, noting this eliminates the possibility of an electrical spark. Most auto shops have an air compressor, so the autogas evacuation pump allows the shop to use an air hose instead of an electrical cord. The unit features an inlet and outlet pressure gauge so technicians can monitor pressures. “It allows you to monitor in real time what’s going on with the pressures of the two tanks,” he added.

The product includes a visual flow indicator that enables a user to visually monitor the transfer of propane during the evacuation process. Kennedy called it a “sight flow glass,” that features a red ball to show the flow of propane being evacuated into the storage tank. “Obviously, propane in a liquid or vapor state is super clear; you can’t see it. So you will see this little ball moving around and can watch the flow of product being moved.”

Blossman describes the product as the first of its kind in the U.S., adding that the machine is “helping to keep propane autogas at the forefront of alternative fuel conversations across the country and continuing its reputation for being a safe, viable option for fleets.” —Daryl Lubinsky