Steve Relyea
Wednesday, April 4, 2018
Propane tank manufacturers have been coping with a rising cost of steel, and they will have to continue to do so as the recently announced tariff on imported steel goes into effect. 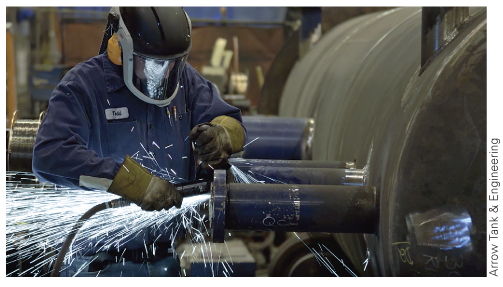 As outlined, the 25% tariff is to apply to imports from all countries except Canada and Mexico. Under certain circumstances, additional countries or industries may be exempted in the future. The tariff and a 10% tariff on aluminum imports were announced in presidential proclamations March 8. As this was written, they were to begin March 23, 2018.

The price of steel had already been rising. Market participants had seen in advance the possibility of the tariffs, because the U.S. Department of Commerce had been conducting Section 232 investigations, which help determine the effects of imports on America’s national security. Section 232 also gives the president the ability to address any such effects by restricting imports through tariffs.

As the start of the tariffs neared, two propane tank manufacturers interviewed by BPN said they hadn’t seen price spikes of this magnitude before in the time they’ve been in business. At the same time, these and other manufacturers said there are things that can be done to mitigate the effects the steel tariff has on the propane tank market.

LPG Ventures
“We’re already seeing an effect,” said John Baanders, president of LPG Ventures, Inc. (Kearney, Mo.). “We use a half dozen different suppliers, all North American, and every one of them is seeing a huge increase in demand as buyers try to source domestically.”

The company manufactures ASME storage vessels for the propane, ammonia, and industrial gas industries. It designs and fabricates vessels in sizes up to 120,000 gal. capacity. “In steel tanks, steel is 65% to 70% of the cost of the goods,” Baanders said.

The price of steel from major mills had already increased by as much as $400 per ton in 2017, and it has gone up another $150 per ton in just the first two months of 2018. “And the tariff is not even in effect yet,” he added. “In addition to that, delivery times are now 16 weeks and quotes are valid for only 24 hours. There is a huge run going on. It will probably moderate going forward, but for now, it is what it is.

“One of my suppliers says he hasn’t seen anything like this since the 1970s. I haven’t seen anything like it in the time I’ve been in business. I’m opposed to the tariffs, because what’s happening now was completely foreseeable. There wasn’t an overcapacity of domestic sources, because steel mills were shut down. There’s a ramp-up time before they can be up and running again and, because people are not sure the tariffs will last, I’m not even sure they will invest in those mills.

“I think this is going to be a year in flux. I wouldn’t panic; we’re not panicking. It will find a middle point. It will be higher than it was, but it will find an equilibrium that make sense for everyone. We had a lot of steel bought and a lot already scheduled for production,” Baanders concluded. “We will be able to keep up with customer demand and keep the price competitive.”

Arrow Tank & Engineering
“We actually started feeling the impact of tariffs take effect a couple weeks prior to the announcement beginning with 73-, 80-, and 84-inch cargo tank heads,” said Tim Schweppe, general manager—propane division, Arrow Tank & Engineering (Minneapolis). “This was a rather significant price increase on future orders ranging from 15% to 25%, depending upon the head size. 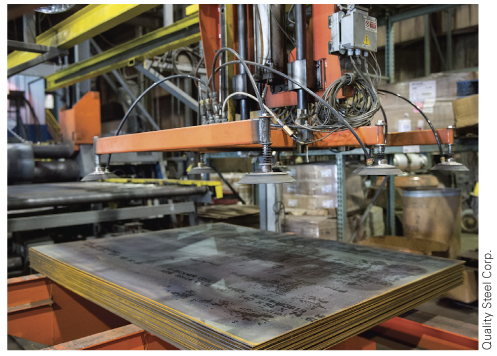 “Very shortly after the tariff announcement, we saw a strong upward movement in cost of plate from the mills,” he added. “Prior to this, steel prices had been moving upward rather sluggishly, whereas you could make material purchases every so often without too much worry. Now we had a game-changer on our hands and needed to make some quick decisions.”

Arrow Tank & Engineering uses steel to manufacture bobtails, cargo tanks, and storage vessels. The storage vessels are available in capacities from 18,000 to 120,000 gal. and larger.

“In an effort to stabilize pricing for our customers, Arrow secured the remaining anticipated major materials in advance of the tariffs,” Schweppe said. “This approach will effectively protect Arrow’s customers from additional price increases and help maintain supply through the current buying season.

“That said, and with no other surprises, we anticipate the price escalator when implemented to affect cargo tank prices by approximately 10%. To put it into another perspective, our price escalator on the tank amounts to just 1.5% of a complete bobtail with chassis, which shouldn’t stop anyone from replacing equipment. Another point of consideration is that when new values increase, the used values naturally follow. Therefore, if upgrading/replacing a bobtail, you may not see any change with regard to out-of-pocket cost.

“Shifting gears toward bulk LPG storage tanks, the bite could move prices a bit more depending upon a manufacturer’s position with regard to materials acquired prior to the ‘T-word,’” Schweppe added. “Again, no need to panic. Deals are still out there to be made, especially since today’s price, even with escalators, is comparable to those offered just four years ago. And, similarly to the bobtail market, used storage prices will follow once all the market factors settle into place.” 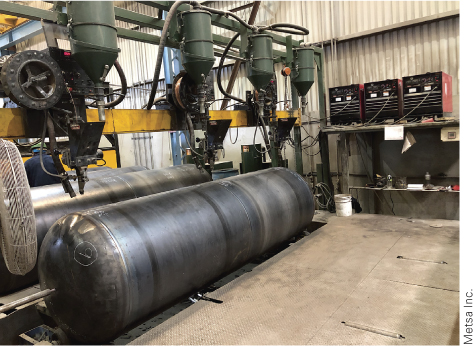 Quality Steel manufactures a range of propane tanks that includes aboveground, above/underground, and underground tanks with water capacities from 120 to 1990 gallons.

“The recent run-up in steel prices has had an impact on the price of propane tanks,” Hardin said. “Steel prices have risen dramatically in the last six months, but nobody is telling me the reason is the tariffs.

“We have contacted our representatives and told them, if there is a tariff, it should be applied to finished goods, too. We have locations in Mississippi, Ohio, and Utah, and we have approached our state representatives as well as our U.S. congressmen.”

Granby Industries
Purchasers of propane tanks are already experiencing the effect of the tariffs, as some suppliers have begun to announce price increases, said Bruce Whitney, vice president, propane group, Granby Industries (Granby, Quebec, Canada). Consumers hadn’t seen significant price increases in recent years, he added, but they are now as the cost of both domestic and imported steel has been rising.

“As in most all durable products, the market price of raw materials is typically a significant driver on the price of finished goods,” he said. “Because domestic steel capacities are lower than demand, domestic steel prices are rising as well, simply due to market conditions. It is important to understand that the impact of Section 232 investigations over the past six months has, by default, created an increase in the cost of steel produced out of the U.S.A. as many U.S.A. manufacturers are increasingly sourcing steel from U.S. steel mills. Basic principles of supply and demand have caused upward pressure on pricing, especially during this time. When you add in the new tariffs, additional upward pressure will manifest itself in pricing of goods produced from steel and aluminum.”

“We build and refurbish a very significant number of tanks for customers and always work to keep prices in line with cost of materials for both refurbished as well as new tank products,” Whitney said of the Fischer Tanks division. “We understand the place for tariffs to maintain a balance in trade and we hope that, while we cannot control it, we can best insulate our customers from price spikes due to cost of raw materials.

“When prices rise, we are finding that propane marketers look more closely at their aging tank inventory toward refurbishing to make every dollar they spend toward storage count,” he concluded. “Propane marketers are also setting larger tanks when they can, in the field as a new way to expand their storage capacities. Both needs fit our wheelhouse as Fischer Tanks is a major tank re-furbisher and have expanded our capacity in building new 500- and 1000-gal. tanks. We are ready for these needs.”

Metsa
“Without a doubt, steel drives the cost of propane tanks and cylinders,” said Robert Kenney, operations director at Metsa Inc. (Ciénega de Flores, Nuevo León, Mexico). “When considering North American products, the tariffs themselves should not be an issue because Canada and Mexico have been temporarily exempt. What is an issue is that this action will have an effect on global steel prices and cause an increase, meaning all the suppliers across the board will have to raise prices. 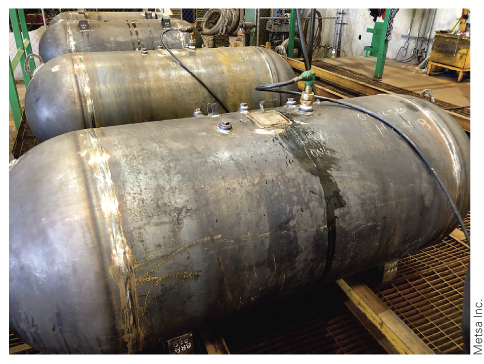 “Steel prices in general have been on the rise for the greater part of the year,” he added, “so it would not be a surprise to see price increases start as early as Q2 2018. I would say that the widespread price increase will probably take effect as of Q3.”

“Metsa is committed to offering first-class service at the best price possible to our customers,” Kenney said. “We have had our eye on the Section 232 investigation for some time and have made concerted efforts to combat any type of increase possible through creative cost savings.

“I believe that price increases in steel will force all of us in the industry to embrace leaner operations and sort out inefficiencies so we can save elsewhere and continue to offer top-of-the-line processes at a competitive cost to our customers.

“Metsa believes that there is great value in mutually beneficial free trade,” Kenney added. “Metsa tanks are built with 100% North American materials and labor, and we can offer our clients cost-effective, high-quality products. Metsa tanks in the end wind up with United States consumers who benefit from better prices for tanks from their LPG suppliers. Tariffs and other protectionist methods not only impact foreign companies looking to compete, but the consumer who will have to deal with increase in costs. North American consumers, U.S. companies, and the Mexican labor force all benefit from free trade in our region. We play by the rules and make sure that Metsa is viewed as a good neighbor and a solid supplier, not as an opportunistic foreign price dumper.”

Viking/Hexagon Regasco
A propane cylinder manufacturer that uses materials other than steel or aluminum is also keeping an eye on the effects of the tariffs. While the tariffs won’t affect this manufacturer directly, they will affect its steel- and aluminum-consuming competitors.

“Independent of tariffs, we continue to see the cost delta between steel and composite cylinders decline, so we watch with a close eye the impact these recent announcements may have in the market,” said Sean Ellen, managing director of Viking Cylinders—A Hexagon Co. (Heath, Ohio).

Viking Cylinders is the North American brand of the composite cylinders manufactured by Hexagon Regasco (Raufoss, Norway). These cylinders are constructed using a mixture of fibers and plastic resin instead of metal. They are available with propane capacities of 11, 17, 22, and 31 pounds.

“Based on our understanding of the tariffs, we do not believe there would be any impact on the Hexagon Ragasco cylinders imported into the United States,” Ellen said. “While we believe our composite cylinders are leading technology, we also believe in an even playing field for all manufacturers.

“While all cylinder manufacturers face the challenges of material cost increases,” he added, “one of the strengths of Hexagon is our size and scope within the composite business that we believe provides us a competitive advantage. Long-term strategic partnerships with our key suppliers provides us material cost continuity.” —Steve Relyea