JD Buss
Tuesday, October 27, 2020
By JD Buss… Merriam-Webster defines this phrase as “a person who has failed or been hurt when trying to do something is careful or fearful about doing it again.” Another dictionary search placed the origin of this phrase in the year 1894. 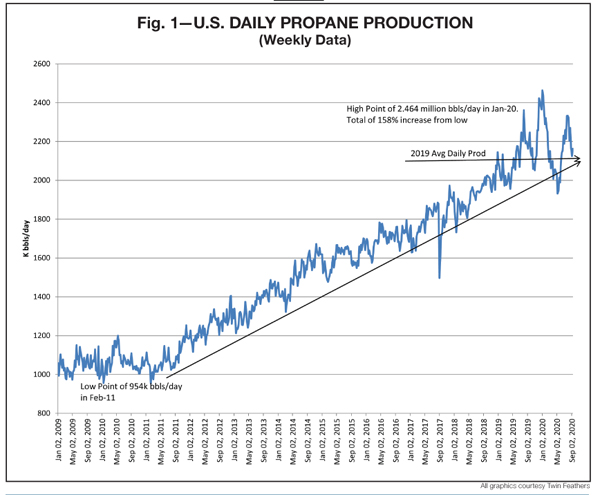 A 120-plus-year-old phrase may be the best way to describe the domestic propane distributor’s response to this year’s COVID-induced supply season.

March 11, 2020, saw an end to the NBA season. In the next 24 hours propane conferences across the U.S. began to be cancelled. Within four days, most of the U.S. had gone on a lockdown. Then North America’s lockdown soon became a cry for the energy sector’s lockdown as well.

CHAOTIC SITUATION
Over the ensuing weeks, phone call after phone call revealed this refinery shutting production and another producer reducing output. The swift decision makers of the next one or two weeks secured the best supply deals (at that time) while those waiting in the wings were forced to make the tough decision between paying higher supplier costs or risk not having propane later in the season.

The premise for such chaotic producer reactions—a loss of demand due to COVID-19 restrictions that could severely impact energy producers and refiners. That risk drove drastic steps to make sure producer businesses survived. 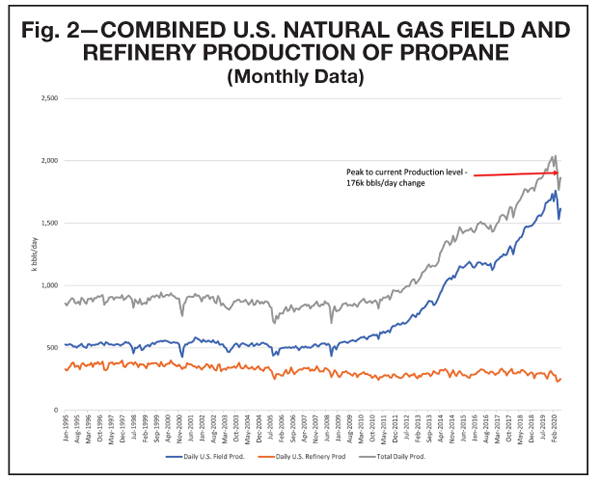 Fast forward six months and there is a clear need to assess if the rhetoric in early spring was well founded or merely blowing smoke that has covered up another scenario.

Twin Feathers’ view (and mine) has always been that data speaks louder than words and that will be where this discussion begins. As a graph of EIA’s weekly propane production from 2009 to the present day (Fig. 1) shows, the 2010-2020 decade saw incredible growth in propane production with a 158% total increase from trough to peak. From the peak in January 2020 to the recent low in early May 2020, total production did see a 532,000-bbld decrease or almost a 22% decline from the top. However, if we look at the production data in a different way, we see these results: 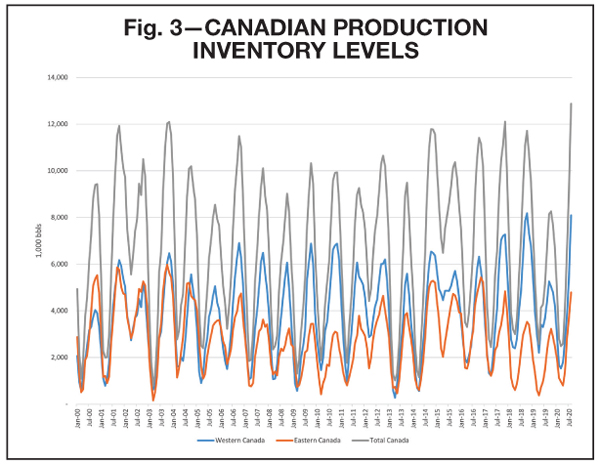 Weekly data from EIA can be subject to shifts when the delayed monthly data comes out, so we prepared a chart from the combined U.S. natural gas field and refinery production of propane (Fig. 2).
We see several similarities between the charts: similar growth from 2009 forward, similar peak in January 2020, and similar drop in production after the January high. Two other data points caught our attention:
Looking at these two data sets from EIA we see that production did decline in late Q1 to early Q2 2020, but we have seen production rebound, as well as seeing total 2020 production above the prior year. That seems to paint a different picture than what was projected back in March and April of this year.

But maybe all of this production is necessary because inventory levels remain low and there is still a risk of lower supply during the peak winter demand season? Let’s pull up the inventory charts to support or negate this theory (Fig. 3). 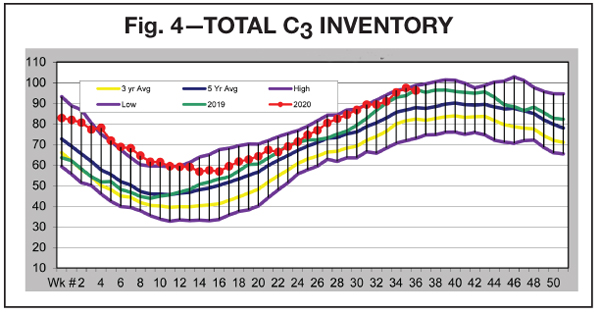 National Energy Board (NEB) in Canada provides monthly statistics on propane inventory for the nation in total and both Western and Eastern sections. This graph highlights the fact that the August report for inventory was the highest level for Canada in the last two decades. What else provides some intrigue is that all of the prior inventory peak levels occurred either in October or November. The implication now being that Canadian inventory levels could get even higher by the first of November 2020.

But high Canadian inventory does not necessarily mean U.S. levels will be similar. Or will they?

Our total U.S Inventory graph for 2020 (Fig. 4) reveals that the U.S. inventory levels are right at the five-year-high mark and there is only one year that has a higher level—the infamous summer of 2016 that led into the record high of 101+ MMbbl. Inventory levels as of week 36 were already resting at 95.22 MMbbl—only 6 million from the prior peak. 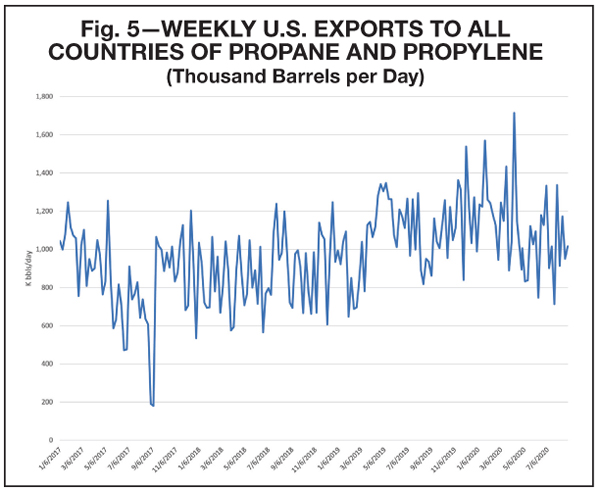 High inventory levels seem to negate our earlier claim that higher production was necessary to meet peak winter demand. However, domestic demand, and specifically winter demand, has taken a backseat in the last seven to 10 years. Exports now dominate the demand side of the equation. Maybe exports have risen in 2020 and are justification for production to remain high.

Again, using EIA data, we can see the growth of exports for the last four years (Fig. 5).

In some respects, this graph appears similar to the production graph from EIA—exports peak through the first few months of 2020 and then decline after that. When we look at the EIA monthly data on exports and do a comparison of 2020 to 2019, we see these items:

With this snapshot of data, we see evidence that export demand has been higher in 2020 and likely to stay that way for the remainder of the year. This increase of 183,000 bbld surprisingly almost matches the increase in 2020 propane production (179,000 bbld) versus the 2019 production.

JUSTIFICATION FOR PROPANE PRODUCTION
Exports provide some justification for propane production levels to remain elevated, but the real risk to production may not lay in the current data. Throughout the last six months, oil and gas rig counts have plummeted. The fear of future lower production, whenever that future may be, provides a great deal of support for rhetoric of this past spring. A recent Baker Hughes rig count graph (Fig. 6) demonstrates that fact. 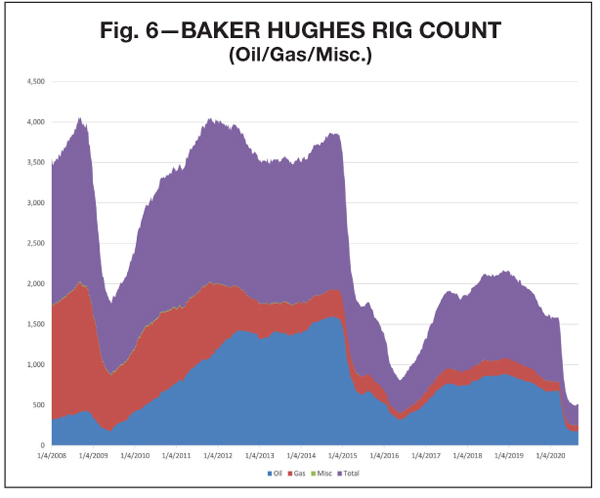 The Saudi-induced price war of late 2014 and 2015 coincides with a massive reduction in rig counts that essentially bottoms out in the summer of 2016. Then rigs saw a resurgence that built to a new high of 1062 total rigs in the summer of 2018. From that time to February 2020, rigs saw a steady decline before essentially “falling off a cliff” in March to July of 2020.

We could go into a lengthy discussion regarding well production rates in different shale formations and the fact that some wells may have production falling off faster than others, which precipitates the need for additional, new wells. The fact, however, is that the data has failed to show these types of production declines (at least not yet). Furthermore, another graph (Fig. 7) highlights the strong growth in oil production even as oil rigs saw massive decreases during the 2014-2016 timeframe.

Technology has vastly improved in the last 20 years and the market has seen this in higher production levels per well. Which should beg the question, will existing producers push to get even more from each well remaining in the field?

Through our assessment of the last six months, it certainly seems that the original mantra being pitched in the marketplace has failed to come to fruition. Propane production levels did move lower from the January 2020 peak, but we are still maintaining at or above the 2019 levels. Both major producing regions of North America—Canada and the U.S.—are sitting on record inventory levels of propane. Exports have continued their upward trend, but that is merely eating away at 2020’s production excess over 2019. The largest support of the March cries for lower production are the huge decline in rig counts. Yet even this data point lacks some conviction when we see the strength of production in prior years when faced with a low number of operating rigs. 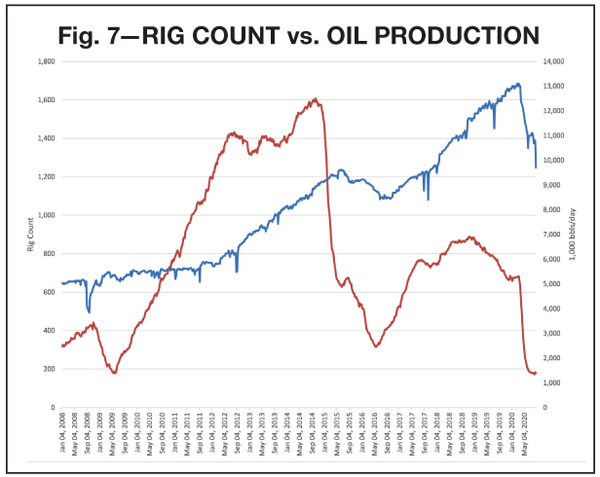 Does this mean that the rhetoric of early spring was a blatant attempt to manipulate the market? We will answer that emphatically, “No.” Based on data at the time, the assessment made was the most accurate available. But going forward, the propane distribution community should keep a few things in mind: If you find yourself feeling “once bitten, twice shy” this year, contact us at Twin Feathers so we can provide advice and assistance in navigating these volatile times.

JD Buss, certified public accountant (CPA) and commodity trading advisor (CTA), has been with Twin Feathers since 2008 and advises retail propane distributors on propane supply and risk management strategies. He can be reached at (913) 851-7575 or This email address is being protected from spambots. You need JavaScript enabled to view it..