Wednesday, October 30, 2019
(October 30, 2019) — Monika Goss always suspected she might end up in the propane industry, but it didn’t stop her from earning a master’s degree in biomedical engineering. After three years of managing a neural engineering lab with more than 20 researchers for the Louis Stokes Cleveland VA Medical Center, she got “the call” from her father, Dave Goss, in early 2018 about a position opening in the family business. 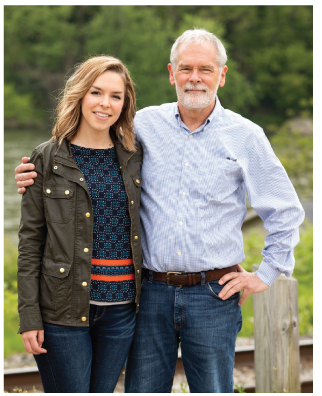 R.N. Goss Gas Products was started by her great-grandfather in 1934 in Pennsylvania, and is now run by Dave. Monika has worked in different roles at the company since she was 14 years old. Now, at 27, she is the purchasing and inventory manager with sights set on one day running the company.

“I always knew in the back of my mind I was coming back,” she explained. “My father has never pressured me and always supported me. He always said keep an open mind.”

Goss Gas Products, based in Reno, Pa., is a local distributor of industrial gases and welding supplies serving residential and commercial customers throughout northwestern Pennsylvania and is part of a family of local brands including RenovEx and Provanta, Inc. The companies employ more than 100 local people and distribute approximately 7 million gallons of propane a year, according to Monika.

“It’s a really neat opportunity. I feel not very many people can say they’ve been at a company working with their dad. We fortunately get along really well. I think we’re similar people with similar ways of thinking.“

Since returning to Goss Gas full-time, she said she is trying to learn all she can about the family business. “I’ve learned a lot in a year and a half. I pretty much bounce between the three divisions.”

“I love it. It’s a really cool feeling when you’re working around the family business knowing you get back directly what you put in.”

Being young and a female, Goss initially thought she might get some pushback from coworkers and industry partners wondering if she was serious about a career in the propane industry, but that has not been the case, she said.

“Thankfully, that fear of not being accepted was unfounded. I do definitely get a couple of customers who don’t trust my knowledge. It’s a male-dominated industry, and not the industry that attracts young women. It’s fun to challenge their [her customers’] expectations.”

Vendors have also helped ease the transition. “I’ve made many phone calls where I’ve said, ‘Can you walk me through this?’ Never be afraid to ask for help.”

Monika and her husband Matt, an emergency room doctor, both commute – he drives south an hour to Pittsburgh – she drives north an hour. “It’s a commute, but it’s my time to think about the day,” she said. “l’ve gotten better at leaving things for tomorrow. When I first started, I wanted to do it all and do it all right now.”

In their free time, the couple both love to hike and Matt particularly likes to fish in the Allegheny River area, she added. “I lived in Cleveland for almost nine years, and I can tell you I’m not a city girl.

“I also like to bake. It’s relaxing to make 10 dozen cookies,” she said, explaining she brings in baked goods regularly for Goss Gas employees.

Her plans for the future? “Just continue to learn. I’m trying to soak up as much information as I can. I want to get involved in everything,” Monika said. “I just joined Women in Propane. I’d like to get more involved in the organization. It’s neat to have allies who have been there, done that.”

People
Zhanar Gilimova: Global Propane Leader and Catalyst for Gender Equality
Inside the career trajectory and character assets that make up WINLPG's Woman of the Year
Kim Furphy Understands HR is ‘Not Just the Warm and Fuzzy’
People
Alicia Stavitzski Brings New Ideas to Regional Gas Company
With no prior knowledge of propane, Stavitzski stepped into a new position in 2019 at Heller’s Gas
People
Women In Propane: WINLPG Winner Knew An Energy Career Was In Her Future
Marcela Rosado Orellana knew as a teenager she wanted a career in the oil and gas industry.
People
Women In Propane: Career In Energy Industry Has Come Full Circle
“Own your own life. Don’t let anyone tell you you can’t.”

Insurance
Don’t Shoot the Messenger — Insurance Premiums Are Up
3 reasons for the increasing costs and 7 ways to mitigate their effects
Marketing
A Midyear Propane Supply Update
Amid a pull of propane exports to Asia, U.S. marketers consider 2021-2022 decisions
California Marketers Set Goal of 100% Renewable Propane
Inside the WPGA’s 2030 commitment and why it’s the industry’s ‘moonshot’
Feature Articles
Enbridge Line 5 Partially Closed Amid Continued Study of Infrastructure
Insurance
What's the Greatest Risk Your Company Faces?
Reduce the risk of a cyberattack on your company with a cyber liability policy
Design by Adaptivethemes.com