Still, the fact remains that the majority of homes heat with natural gas. How does a regional energy provider use propane to drive growth? The story of Rhoads Energy, an energy provider in South-Central Pennsylvania, offers lessons about building a profitable propane division from the ground up. It also reveals much about propane’s untapped potential and the value of creative thinking.

A Key Piece of the Full-Service Puzzle

Rhoads Energy is a 100-year-old company that has reinvented itself over the past 15 years. During the early 2000s, the company was still focused primarily on a shrinking energy market segment: heating oil.

Today, because of an aggressive plan to become a full-service energy provider, the Rhoads Energy Family of Companies serve tens of thousands of customers, offering a range of fuels, heating, ventilation and air conditioning (HVAC) service and installation, fleet fueling and more. Another important element in the company’s renaissance: propane.

In late 2013, the company established a division to sell propane and propane equipment. Since then, it has grown into a valuable source of revenue, driving year-over-year growth in customers served and gallons delivered.

Like most of the United States, the percentage of homes in Pennsylvania that heat with propane is relatively small (about 5% compared to more than 50% for natural gas).

However, that figure represents 220,000 propane homes in the state — a sizable market.

Initially, Rhoads Energy focused on marketing that would build a residential home heating customer base, highlighting the company’s ability not just to deliver propane, but also to service and install propane heating systems.

“We wanted our propane customers to understand that Rhoads Energy could be a one-stop shop for all their energy needs,” said Michael DeBerdine, Rhoads Energy CEO. “We also have a decades-long reputation for service and community involvement, so it was critical to convey that brand to our new propane customers.”

The company differentiated from competitors in other ways, allowing customers to choose a leased or purchased tank option and eliminating enrollment, delivery and hazmat fees. In addition, they developed the “Bundle Up” program, which offered a budget payment plan and service contract.

The company also cross-marketed to its sizable existing customer base, emphasizing the versatility, portability and value of propane to electrically heated homes and homeowners whose oil heat systems were reaching the end of their lifespans.

In a few years, Rhoads Energy and its partner brands had thousands of customers using propane for residential heat — but that was just the beginning.

When the company launched its propane offering, its goal was not simply to sell during cold-weather months, but to craft a program that would increase sales through every season.

“The idea of becoming a full-service energy company was to move away from the typical revenue cycles that are a threat to so many companies in our industry,” DeBerdine said. “We challenged our team to come up with new ways to achieve our goal of selling year-round gallons of propane.”

The brainstorm session led to new offerings that would appeal to a wide range of homeowners — not just to existing propane users. The company developed a broad-based marketing effort to promote the benefits of tankless propane water heaters, house generators and other products.

The company also focused on promoting propane as the fuel for outdoor living: propane fire pits, outdoor cooktops, pool and spa heaters and more. That focus is backed by key trends. A recent survey found that 90% of Americans with outdoor living space have been taking greater advantage of their decks, porches and patios and consider their outdoor living space more valuable than ever before.

Still, a huge majority (88%) surveyed by the International Casual Furnishings Association say they are dissatisfied with their outdoor living space, with about half expressing a desire for a fire pit or outdoor cooking options.

The result was the establishment of a new revenue stream for the company and delivery of those “year-round gallons” during the summer season when sales traditionally see a significant drop.

Residential propane service remains the foundation of Rhoads Energy’s program. But the company also works hard to unearth and pursue opportunities for growth. “It began with our team asking questions about our specific marketplace,” DeBerdine said. “What types of customers use propane? Where were the underserved? How could our willingness to take a creative approach help them?”

The answers generated new partnerships and new ways to deliver value. Listed below are a few instances where propane’s portability and flexibility fueled growth: 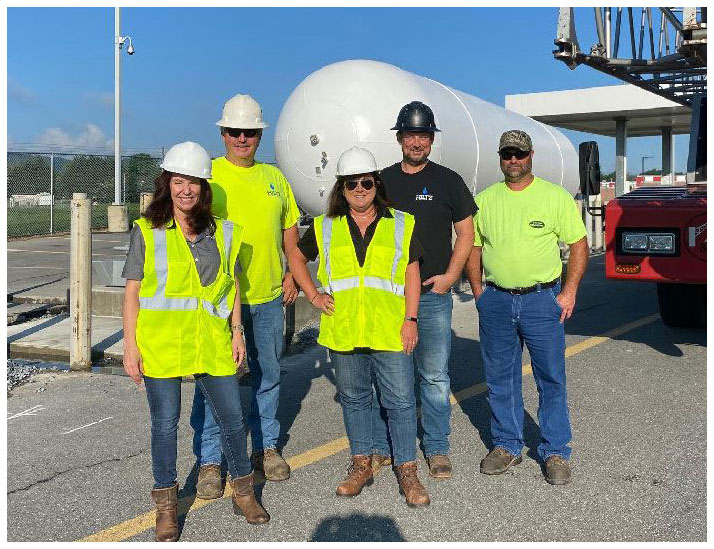 In 2014, the company made a bold move to secure business in a still-emerging market. Rhoads began a service aimed at school districts seeking to convert their bus fleets to run on propane autogas. The company built the program through partnerships with bus manufacturers and associations and ongoing outreach to educate the region’s districts about the potential environmental and financial advantages of propane buses.

That early-to-market effort paid off for Rhoads Energy, which today delivers hundreds of thousands of gallons annually to five different districts. The company also embraced propane for its own operations — a way to show prospects that Rhoads Energy was willing to “walk the talk.” Today, approximately 20% of the company’s fleet runs on autogas, including service vans, crane trucks and SUVs. Rhoads Energy also installed propane filling stations at three company-owned properties.

Rhoads Energy’s experience was not without setbacks and challenges. But the company’s commitment to building a propane division ultimately delivered the sought-after “year-round gallons” and the potential for much more near-term growth in the future.

The company’s leadership and marketing team identified a few guiding principles that could be useful to other providers taking on the same challenge. First, be creative. Get outside your comfort zone and consider how your market uses — or, more importantly, under-uses — propane.

Next, get help. Identify potential partners in your community and use any resources available from state and national organizations. Be sure to realize and leverage the value of your company’s current assets: your brand, your existing customer base, your existing staff’s talent and more.

Finally, fuel the effort with consistent communication to customers and prospects. Help them understand the benefits of propane, emerging ways to use the fuel and what differentiates your company from other providers.

Jennifer Goldbach is vice president of business development for the Rhoads Energy family of companies, which provide heating oil and propane delivery, HVAC equipment installation and service, fleet fueling and other energy services in its southcentral Pennsylvania service area. In her role, Goldbach manages all strategy, staff and programs aimed at generating business. She has also spearheaded the creation of several new revenue streams at Rhoads Energy, including the development of the company’s school autogas program. Visit rhoadsenergy.com.