How Should the LPG Industry Consider Greenhouse Gas Emissions? Skip to main content

How Should the LPG Industry Consider Greenhouse Gas Emissions?

When these components are burned as fuel, the exhaust gas is carbon dioxide (CO2), the main component of greenhouse gases (GHG). The first question to ask is how much GHG emissions come from burning propane and how does this compare with burning natural gas? The second question: Is the GHG amount significant enough to matter, and if it does, should the United States add propane emissions to carbon capture and storage in deep underground rock formations?

What Fossil Fuels Put Out the Most GHGs?

The general answer (see Table 1) is coal (210), then gasoline (157), then natural gas (117) — where units are pounds of CO2 per million British thermal unit (Btu) when the fuel is burned. Coal is twice as dirty as natural gas, and this is why the U.S. has been able to reduce its GHG substantially in the past 10 years, as coal-fired power plants have been changing to gas-fired plants because natural gas was cheaper.

Burning propane (139) or butane (143) are cleaner than gasoline (157) and not much dirtier than natural gas (117). This is an advantage in an era when the effect of GHG on climate change will continue to be a boardroom topic — especially with the release of the Intergovernmental Panel on Climate Change report on global warming’s influence on climate. 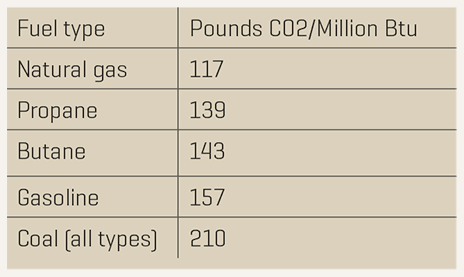 The full picture requires combining the results of Table 1 with actual U.S. production of propane and comparing it against natural gas. The U.S. Energy Information Administration reports U.S. energy production by source and reveals NGPLs (propane and butane) at 6.8 quadrillion Btu versus natural gas at 34.7 quadrillion Btu. Multiplying the U.S. production levels by their CO2 emission coefficients in the table gives their GHG emissions in CO2-equivalents in 2020. The results are natural gas production burns to 1.84 gigatons (Gt)/year, and propane burns to 0.43 Gt/year, both in CO2-equ units for comparison’s sake. These numbers are far less than the total of about 6 Gt/year GHG emitted by the U.S., which includes burning of coal and oil. The ratio is 23%, which means propane GHG emissions were almost a quarter of natural gas GHG emissions in 2020.

In the U.S., the GHG from burning propane are 23% of those from burning natural gas, measured as CO2-equivalent. GHG emissions from propane are a significant source of GHG. A mix of propane and butane would lead to the same conclusion. Therefore, propane GHG’s contribution to global warming should not be ignored.

Carbon capture and storage (CCS) is an effective way to remove GHG before these gases float up into the atmosphere. There are natural ways to remove CO2.

As its name suggests, with CCS, CO2 has to be captured in some way — by chemicals in power plant smokestacks or by redirecting CO2 outflow streams in cement or steel industries. Then the CO2 is injected via wells into deep underground layers, where it is safely stored for hundreds of years until it melds with the rock strata.

There are two advantages of CCS. First, the oil and gas industry has been doing this for decades. CO2 is injected at one well to soften the residual oil then produced from a second well along with some of the CO2. Second, it can be scaled up to needed levels determined by the Paris Agreement. The U.S. has enough oil and gas fields to store its annual GHG emissions (6 Gt/year) for 23 years.

Propane is almost a perfect fuel. It’s a liquid at atmospheric conditions, portable, with good energy-intensity and is almost as low-carbon as natural gas. It’s the third most popular vehicle fuel in Europe and much less carbon-intensive than gasoline and diesel. LPG usage is lowering carbon footprints compared with other liquid fuels. As engines and motors increasingly become electrified, so will many of the devices that use propane, and the demand for LPG has the potential to gradually fall. But maybe not, because there is a perfect fuel in the wings. Renewable dimethyl ether (rDME) can be made from methanol, dairy, food and agricultural wastes, as well as CO2 and electricity.

rDME can be blended with propane to lower its carbon emissions and can be easily merged with the propane distribution network. One claim is that rDME is ultra-low carbon or carbon-negative, and according to SHV Energy and UGI International, GHG emissions are 85% below other fossil fuels. This would make it a perfect liquid fuel because natural gas emissions are only 45% lower than coals. rDME can also be used to produce liquid hydrogen in a module placed at a waste feedstock source, then transported to an end-user where excess hydrogen atoms are released as liquid hydrogen. This may be the end goal, as one report said 20% of rDME would be available to improve propane’s carbon footprint.

LPG is a low-carbon fuel, as it emits less carbon dioxide than most conventional fossil fuels and emits practically no black carbon — a contributor to climate change. In Europe, propane is an alternative transport fuel that reduces CO2 emissions — it is already part of the solution to global warming. CCS does not appear to be warranted for exhausts after burning propane, because in the U.S. the resulting GHG are only a quarter of natural gas emissions, and much less than gasoline, oil and coal. The burned product, CO2, is virtually impossible to capture from backyard grills, lawnmowers, home furnaces, forklifts and road vehicles.

If, on the other hand, LPG usage remains a stable or even booming business, an alternative would be to offset their CO2 emissions by paying CCS stations to sequester CO2 from other sources, such as cement or steel manufacturers, where the CO2 is more readily captured. If ESG concerns continue to grow as expected, customers and investors may be satisfied by blending rDME with propane to lower GHG emissions.

A petroleum engineer and consultant, Ian Palmer, Ph.D., has worked at Los Alamos, the U.S. Department of Energy, BP, and Higgs-Palmer Technologies. He is a contributor at Forbes.com and the author of “The Shale Controversy.”

What to Know About Going Remote

Public Policy
The Effects of the Inflation Reduction Act on Propane
How this climate change bill can both help & hurt the industry over time
Beyond the Mains
The Propane Industry's Fight for Energy Choice Legislation
A 30-year industry veteran's take on the battle to present propane as a viable option to reduce emissions
Public Policy
What the EPA's Education & Outreach Plan Means for Propane School Buses
How NPGA & PERC are continuing the fight for propane's recognition as an alternative fuel source
Autogas
What Role Will Autogas Play on the Road to Net-Zero Emissions?
WPGA's Joy Alafia discusses the role of renewable propane in providing alternative fuel for vehicles
EIA Forecasts the Brent Crude Oil Price Will Average $88 Per Barrel for First Half of 2022