Can You Leave Your Employees Alone? Skip to main content

Can You Leave Your Employees Alone?

Understanding the difference between a culture of responsibility vs. authority
Jim Mathis
Friday, October 15, 2021

Experience has taught me that the best leadership is allowing people to do the jobs they naturally do best and not to interfere. Rarely, though, did I ever work for an organization where the senior leadership could do this effectively.

I was in a golf tournament with a client organization where the teams were chosen in advance — except mine. Since I was the guest keynote speaker, I was assigned to play on a team with the sound technician and two others who came on board at the last minute. We weren’t chosen to compete for the prize.

Typically, my strength is in putting, not driving the ball or chipping onto the green. That day I putted well, which we needed. We had two men who could drive the ball like Phil Mickelson and Tiger Woods. The fourth member of the team was chipping the ball way beyond our abilities. We were humming! On the back nine holes, we knew we were playing well. We hadn’t hit above par on any hole. Then we hit a snag. It was a “Captain’s Choice” four-man scramble, which meant you used everyone’s best shot on each stroke. On hole 12, everyone missed the putt.

We were about to give in and take our first bogey (one stroke over par), when our team leader asked me if I had taken my free mulligan yet. (For novices, in some tournaments each player is allowed to hit one do-over shot without a penalty.) “No,” I answered, “and I’m not using it on a putt!”

He said, “I’ve watched you putt the ball all day. I know you can do this. Your first putt was closer than anyone’s.”

The rest of the team agreed and said they were certain I would make the putt. With their encouragement, I made it and saved par. We won that tournament. None of us were outstanding, but each excelled in different areas, and it carried our victory. Each person had one skill they were gifted at doing. Everyone supported others in the tough moments. Do you lead a team like this?

Everyone is great at doing something. Successful leaders discover what that is.

If you are miserable in your job, odds are you are doing tasks that don’t come naturally to you. There are other tasks you can do without breaking a sweat, but some things about your job are a struggle and dominate your thinking.

You Get What You Hire

Many times, we hire people and give them a list of job requirements. However, we do not allow them to perform their tasks unsupervised or unchecked. This is called “hiring for responsibility.” They have a list of tasks and must answer back to you for each of them.

For example, Mary has been hired by a gas company. She reports to Allison on her progress and turns in a weekly report. Allison must review the report, comment on it and file it for a future job review. Allison spends a large amount of time supervising Mary and never gets her own tasks done efficiently. Her work suffers and she runs out of time frequently.

Mary must spend time filling out reports and doesn’t have the authority to make decisions outside of her responsibilities without asking Allison’s permission each time. If Allison is friendly and approachable, this is usually done without a problem.

However, if Allison isn’t a detail-oriented person or has a dominant attitude, she resents the constant interruptions from someone over whom she feels superior. If Mary is efficient, she eventually resents the chain of command that doesn’t favor her creativity or intelligence. She will find other employment that fulfills her. Now, Allison must spend her valuable time interviewing other candidates, then training them to do those same tasks efficiently. The stress and tension she experiences are working her into an early grave, and her most important tasks are left undone.

If the gas company hired self-sufficient people with a goal of meeting the corporate policy of satisfying customers while keeping within their budget, Allison would be free to do more work. Mary would be rewarded for getting the job done right and gaining customers. Everyone would be happier and fulfilled.

This is called “hiring for authority.” Allison interviews candidates. She tells them what the goals and policies of the gas company are and where they will fit into those ideals. She tells them that after an orientation period of adjustment, the successful candidate will have the authority to do their job without constantly having to seek permission or the approval to do it.

Some people are insecure and afraid of giving away authority. John Maxwell, an American author, speaker and pastor, says, “If you have to constantly tell people you are the leader, you’re not the leader.” Authority given to others increases influence and elevates leaders in everyone’s minds and attitudes. As Vidal Sassoon said, “If you don’t look good, we don’t look good.”

Is this you? Can you go on a vacation, a corporate retreat or to a convention/conference without checking in with your office? You are probably not delegating authority to do jobs. If you are out of touch with the organization for a period and upon your return there are multiple messages from people asking for approval to make decisions, I guarantee you are hiring for responsibility.

A CEO in an audience I was presenting for said, “I can’t give these people responsibility. They’re idiots!” I asked, “Well, who hired them?” He looked embarrassed and said, “Well ... I did!” 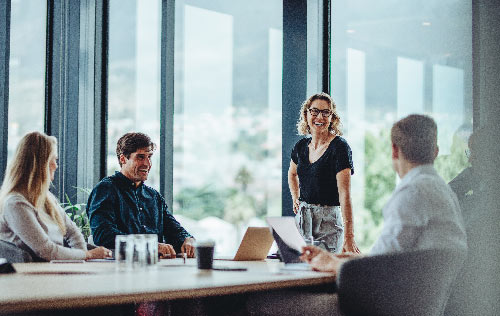 Donny Deutsch, an American branding and marketing professional, says, “I think the great leaders find partners who basically can exploit their weaknesses but not dance on their strengths. Instead of hiring weaker versions of themselves, they hire people that are tremendous experts at what they’re not.” Do you hire people who are strong at what you are strong at doing? Or do you hire to cover your weak areas effectively?

Think of your job as a partnership with your staff. Your duty is to hire people who complement your gifts with theirs. Look at many of the great leaders throughout history. They surrounded themselves with people who excelled in the areas where they were deficient.

Abraham Lincoln appointed a cabinet of men who were his political rivals but geniuses in the areas in which he wasn’t as knowledgeable. John F. Kennedy did the same. He had a cabinet of people who could make knowledgeable decisions in their given areas of authority.

In the movie “Magnum Force,” Clint Eastwood said, “A man’s got to know his limitations.” (The same is true for women). Successful leaders know what they can and cannot do best. They also know how to locate and assign people according to their top skills and gifts to cover their own shortcomings. They don’t micromanage people. They focus their attention on expanding their influence and the organization’s reach.

“Great leaders constantly ask, ‘Who could be doing what I am doing?’” — John Maxwell

Who Gave You Permission?

Rodney is a propane gas store manager who attended a company retreat. While he was away, an emergency arose. It was a gas leak at a customer’s business. Rather than bother Rodney, his team took care of the issue and replaced the malfunctioning equipment without cost to the customer. They assumed it was their job to do what Rodney would have done. When Rodney checked in that afternoon, he discovered a smiling team who had averted a disaster and made his store (and him) look great in the eyes of his customer.

Immediately, Rodney rewarded the members of the team who handled the issue without a major incident or disturbing him. He went out of his way to thank and single out the people who took the initiative of putting the customer’s needs first and making his store and team look great.

Team members who exercise authority when satisfying your customers should be rewarded immediately, not punished or penalized. People do what is rewarded. If you don’t trust them, don’t hire them.

Do you release authority to your staff and employees? If an associate goes the extra mile or gives a small discount to get a large contract, are they slapped on the hand? If so, they not only won’t do it again, but they will also pass this attitude along to the next customer: “We don’t reward anyone who doesn’t play by our rules.” Customers won’t play by your rules very long; they’ll just go elsewhere.

Are your service and sales teams responsible for making you and the company look good? Do they take ownership, empowerment and authority to make everyone look good? Are you micromanaging people who couldn’t perform without supervision? Have you ever assessed the strengths of your team and reassigned tasks based on who can perform the best at each task? Can you leave them alone, knowing they will do the job efficiently?

Jim Mathis, IPCS, CSP, CJMT, MDiv. is The Reinvention PRO, an International Platform certified speaker, certified speaking professional, certified John Maxwell speaker and trainer and best-selling author of “Reinvention Made Easy: Change Your Strategy, Change Your Results.” To subscribe to his free professional development newsletter, please send an email to subscribe@jimmathis.com with the word SUBSCRIBE in the subject. An electronic copy will be sent out to you every month. For more information on how Jim and his programs can benefit your organization or group, call 404-922-8199 or visit jimmathis.com. © 2021 Reinvention Nation LLC.

Verbatim
Propane Leaders Answer: You’re Given One Wish, But You Cannot Use It on Yourself — What Would You Wish For?
Respondents yearn for a peaceful & harmonious world in Nancy Coop’s latest column
Management
How to Support Individuality in the Propane Workplace
5 truths to keep leaders grounded in the humanity of their employees
Marketing
Why Selling Is a Process, Not an Event
How to embrace the process & develop sales over time
Management
Handling the Tough Employee Appraisal in Trying Times
Navigating difficult conversations with different styles of communication
Strategy
Key Leadership Styles & the Outcomes You Can Expect From Them
Understanding employee engagement & how to reduce turnover