John Needham
Monday, December 30, 2019
(December 30, 2019) — Strict requirements for ships to significantly cut sulfur oxide emissions snap into effect Jan. 1, 2020, marking a sea change for the global fuel used to power oceangoing vessels. A new International Maritime Organization (IMO) rule will significantly reduce air pollution to the benefit of human health and the environment, but the change also represents a challenge for the industry. 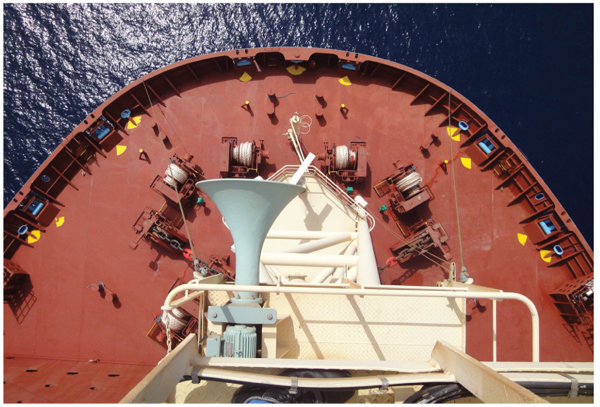 Under the updated cap ratified by IMO, the United Nations’ standard-setting authority for the safety, security, and environmental performance of international shipping, the sulfur content of fueloil used by ships operating outside designated emission control areas shall not exceed 0.5%, which represents an 80% cut from previous 3.5%. So, the adjustment means most ships will switch to new types of compliant bunker fuels, so-called very low sulfur fueloil (VLSFO), or marine gas/diesel oil, or gasoil. The VLSFO blends are new to the market. Many shipowners are also installing scrubbers to curb emissions of higher-sulfur fuels, while to a much lesser extent others plan to bunker with LNG and LPG to achieve compliance.

In the lead-up to implementation, the LPG carrier freight market was bracing for disruption as IMO 2020 neared, reported S&P Global Platts. Owners and charterers of very large gas carriers (VLGCs) were ramping up efforts to install scrubbers ahead of the Jan. 1, 2020 deadline. In addition, sources told the business information provider that the transition appeared poised to split the LPG carrier sector into “flex” and “unflex” segments—between flexible vessels and ships without scrubbers—which would create uncertainty in the freight market if the price of low-sulfur fuel proves costly.

Two-tier Market
Opinions were mixed on the impact a two-tier market would have on the freight rate structure and the chartering strategies of shipowners. Some market participants said VLGCs with scrubbers could command higher rates to those not fitted with the emission-cleaning devices. Depending on tonnage, owners that fitted scrubbers and could sail their vessels at full speed might be inclined to keep their ships in the spot market to take full advantage of the upside. Vessel owners that missed the move toward scrubbers, or chose not to retrofit, might look to hedge the spreads between high-sulfur and low-sulfur fueloil, or marine gasoil, in the swaps market.

“One thought could be that there will be two sets of freight, one for scrubbers and one for the non-fitted, older tonnage,” one source said. “In general, there is interest to time charter out non-scrubber-fitted vessels with high consumption of low-sulfur fuel over the IMO January 2020 period.” While others downplayed a significant freight-rate divide emerging, they commented that owners of scrubber-fitted vessels could potentially earn higher margins on a time charter basis as bunker costs are reduced compared to non-scrubber ships, which will use costlier low-sulfur fuel or marine gasoil.

Knowns and Unknowns
One regional trader told S&P Global Platts that scrubber-fitted ships were expected to command a premium. “It won’t be easy to find bunker ports supplying gasoil, at least at the onset. Not all bunker ports will be ready for the change, so that would mean ships fitted with scrubbers should have more flexibility.”

The consultancy Wood Mackenzie observed that certainties regarding IMO 2020 are few and far between, and there are more unknowns than knowns on its impact. “The few things we can say with certainty are that the cost of ocean freight—and so international waterborne trade—will increase as shippers need to invest or buy more expensive fuels,” the energy research firm said. Added was that refinery earnings should improve with the tighter fuel-quality standards, and the relative value of crude oils will change as high-sulfur, heavy crudes become less valuable. Further, the consumer will pay for the change as IMO 2020 alters the values of all refined products.

Meanwhile, just ahead of the Jan. 1 deadline, VLGC rates at year-end 2019 were on the rise and looked poised to surpass $80 a metric ton. Contributing were higher war-risk insurance premiums due to tensions in the Middle East that saw attacks on vessels and on Saudi energy infrastructure, and higher bunker prices as the IMO 2020 deadline loomed. At the same time, the maritime low-sulfur switch was expected to help keep oil prices firm, which in turn impacts propane since crude is propane’s price guide, analysts noted.

Argus Media reports that the next few months will see significant disruption to the shipping and refining markets, with a permanent result being that high-sulfur fueloil (HSFO) prices will remain below pre-IMO 2020 levels. Power generation is expected to absorb the majority of HSFO globally after it can no longer be used by vessels without scrubbers. “HSFO demand will creep back up in the coming years as more scrubbers are installed, but we don’t expect scrubber uptake to reach a level where HSFO demand makes a full comeback,” said the energy intelligence provider. “[Scrubber] orders will slow once the HSFO price rises past a point that justifies the investment. The introduction of very-low-sulfur fueloil bunker grades will also ensure that the market share for HSFO never returns to pre-IMO levels.” A high percentage of bunker demand will also be met by marine gasoil, although it is a premium-priced product.

Multi-Fuel
Argus added that shipping is set for a likely multi-fuel future. Included in the mix is LNG. “Interest in LNG bunkering has lagged exhaust scrubbers mainly because of the higher cost to retrofit vessel engines, the space LNG tanks take aboard ship, and the lack of LNG bunkering infrastructure at many international ports,” the consultancy said. “There are fewer than 200 LNG-fueled vessels, excluding LNG carriers, available today. Commissioned vessel retrofits and vessel newbuilds would more than double the number of LNG-burning vessels.”

And using LNG as a marine fuel would reduce carbon dioxide and nitrogen oxide emissions and nearly eliminate sulfur oxides and particulate matter compared with vessels burning low-sulfur fueloil or marine gasoil. Interest in more use of the fuel in the future has been supported by the widening of the LNG discount to marine gasoil. “IMO 2020 has been all about sulfur emissions, but future regulations on the emission of nitrogen oxides and greenhouse gases are already on the agenda at the IMO,” Argus observed. “For shipowners who have installed sulfur scrubbers, this won’t be welcome news. But this could be what drives more shippers to LNG in the future.”

LPG Bunkering
Concurrently, one of the world’s largest owners and operators of LPG carriers, BW LPG (Singapore), will use LPG-propelled engines as part of its IMO 2020 compliance strategy. The company has signed contracts, including future options, for the delivery and retrofitting of four dual-fuel engines in its fleet, telling the trade press the first retrofits will take place in conjunction with scheduled dry dockings in 2020.

Interviewed by the World LPG Association, Martin Achermann, CEO of BW LPG, said the vessels will be the first of their kind when retrofits are completed next year. “We are quite proud. BW LPG has been preparing for IMO 2020 for years and this is the culmination of our efforts to ensure we do our part for a cleaner future.” He added that LPG propulsion is both a clean and fuel-efficient solution. “Having dual-fuel engines means we are ‘IMO forever’ as we will be using fuel that has a greener emissions profile, including an inherent compliance with all current and future sulfur oxide emission regulations. Sulfur oxide emissions will be reduced by up to 97%, which also means that we will go beyond IMO’s global 0.5% sulfur emissions cap to also be in full compliance with emission control areas and sulfur emission control areas’ 0.1% cap.”

Ackermann highlighted that bunkering with LPG will cut emissions of particulate matter by 90%, greenhouse gases by 25%, and nitrogen oxides by 20%. “Above and beyond compliance, BW LPG is proud to move the maritime industry a step toward a cleaner future.” Apart from the environmental benefits, he outlined that the company also looked at compelling reasons on the financial and operational fronts, noting that in addition to savings from reduced fuel consumption, “we are buffered from price sensitivity to post-2020 fuel price scenarios with full dual-fuel flexibility. Our vessels will reduce fuel consumption by 11% when running on LPG when compared with compliant fuels. We will also have an easy storage of fuel, faster refueling, and wide availability of bunkering ships and facilities. Operationally, engines are cleaner whereas the fuel flexibility and full redundancy ensure uninterrupted operations. All these ensure that LPG is a long-term sustainable marine fuel.”

Ackermann reviewed that there was exhaustive study of alternatives leading up to the decision to bunker with LPG. “The main objective behind the regulation is for the world’s shipping fleet to reduce pollution. We believe the best way is to provide clean fuel from the source, just as lead was removed from gasoline at the pump in the early 1990s. There is much speculation around fuel cost spreads, heavy fueloil availability, long-term durability of scrubbers, refineries’ ability to deliver, and cost of compliant fuel. We do know that more than 90% of the world’s commercial fleet will be using compliant fuel, and at BW LPG our position is that every shipowner has his own technical strategy based on the technical specifics of their vessels, trading patterns, market views, and investment capabilities. We have a young fleet and we believe that opting for a combination of LPG and cleaner compliant fueloil is a more suitable and sustainable solution for the environment and BW LPG.”

In furtherance of LPG bunkering, South Korea is seen spearheading the establishment of international standards for shipbuilding. Business Korea reports that in the absence of such standards now, the South Korean Ministry of Oceans and Fisheries has submitted a guideline on LPG-fueled vessels to IMO. “We presented the guideline on safety standards for building LPG-fueled ships to the IMO, and experts from around the world will start discussing standards on building them in earnest,” said a ministry official.

South Korea is leading the charge to boost market availability and thereafter demand. Infrastructure is in place in the country, and in particular LPG is emerging as an alternative to other types of vessel fuel as IMO sharply lowers the upper limit for sulfur and other emissions.

Reported is that discussions on LPG-propelled ships began in South Korea in 2016. Kim Sung-chan, a lawmaker in the Liberal Korea Party, proposed a special act on environmentally friendly vessels that year and the legislation eventually passed the National Assembly as the Act on the Promotion of Development and Distribution of Environmentally Friendly Ships. The Ministry of Oceans and Fisheries launched a task force on LPG-powered ships in 2017 and the Korean Register of Shipping submitted a research report on the feasibility and safety of LPG-fuel vessels.