What you may have missed at the association’s annual meeting
Elizabeth Manning
Friday, July 2, 2021

In early June, the National Propane Gas Association (NPGA) took on Washington, D.C., in person for the first time in two years in a new, hybrid setting – association members attended both in-person and virtual sessions throughout the three-day 2021 Annual & Board of Directors Meeting and Policy Forum.

Association business wrapped up at the NPGA Board of Directors Meeting on Tuesday, June 8. NPGA Chair Denis Gagne awarded chair citations to the following NPGA members for their continued service:

Gagne also awarded the State Director of the Year award to Judy Taranovich, president of Proctor Gas and treasurer of PGANE.

Meeting attendees participated in a moment of silence in memory of NPGA Georgia State Director from 2005-2014 and Industry Leader Steven Holloway, who passed away in May.

Previous Treasurer Jeff Stewart (and newly elected vice chair) gave the annual treasurer’s report, stating that the association had ended the year 18% under budget (and 12% under before a decrease in travel expenses due to COVID-19). This good news was due to a variety of reasons, including the number of meetings that went virtual and lack of association travel due to the pandemic, several phases of an internal restructuring undertaken by the association during 2020, and a lower-than-usual budget for external lobbying. These savings were offset by lower-than-budgeted membership dues.

The board also announced an increase in dues and explained the reasoning behind the increase. NPGA membership dues have not been increased in the last six years. Across the board, marketer dues increased 10.75%, supplier dues have been restructured, and the total increase will account for approximately $300,000 more in revenue.

One of the association’s biggest focuses over the past year has been fighting energy bans at the state level. Forty-one “ban the bans” bills were introduced in 22 states this year. Of those, 17 states have enacted legislation protecting energy choice and another four are expected, protecting 45% of annual propane gallons. Kaminski said the wisdom gained from the past year’s pursuits boils down to three lessons learned:

Moving into next year, Kaminski said NPGA will target about five to eight more states next year and the association will also have to start focusing on playing defense for the states that have passed laws already. “We’re also going to be focusing on energy code overhauls — this year there are a number of states that are planning to completely overhaul theirs, and I’m sure there will be more next year. And we’ll be focusing quite a bit on building codes,” Kaminski said.

Kaminski mentioned the industry’s good news — according to data from the Propane Education & Research Council, propane growth cracked 10 billion gallons for the first time in almost a decade. That statistic is the most recent data from PERC, gathered in 2019, so the industry could reasonably expect to see a further increase from 2020, when the COVID-19 pandemic spurred an increased use of propane for other use cases, such as an increase in outdoor and patio activities.

Another trend, Kaminski said, is increased tank wait times. As with almost every manufactured good, due to a high demand for steel, there is increased lead time for propane tanks.

Lastly, he said the association is always monitoring supply, especially as the industry plans for the winter months, as well as how President Joseph Biden’s administration’s energy policies will affect the industry. 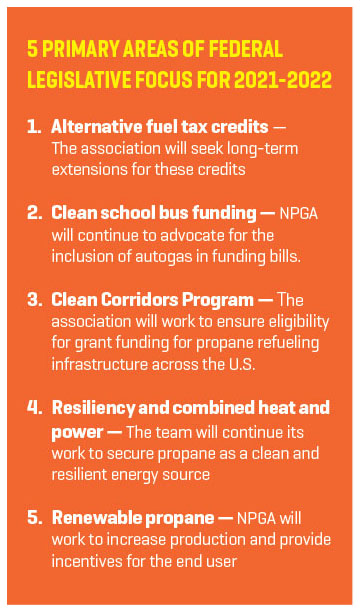 Regarding the federal government’s Clean Corridors Program, Kaminski said the issue with getting autogas included in it was a "chicken and an egg" problem.

“It’s difficult to promote autogas if there aren’t many refueling stations across the country. It’s easy for school buses because they don’t go on highways; they don’t travel cross-country,” Kaminski said. “But what about other types of medium- and heavy-duty vehicles that fit the autogas market?”

NPGA worked with the U.S. House of Representatives to have propane included in the House bill last year but were not able to get it included in the Senate bill. However, this year the situation flipped — the Senate included autogas, but the House took it out. According to Kaminski, the association has been lobbying for inclusion in these bills for about two-and-a-half years.

Kaminski noted that being included — or eligible — for the Clean Corridors Program does not mean the industry gets federal funding for refueling infrastructure, it just means the industry is eligible to participate.

NPGA officers at the event made mention of a renewable propane strategy in the works on the federal level, but Kaminski said that plan is still very much in process. “There are a lot of open-ended issues for us on a national level. One of these is determining the scope of renewable propane,” Kaminski said. “Does it include blends? Is it renewable or conventional plus other molecules like dimethyl ether?”

He noted that determining what would be most likely to pass in Congress is a challenge. Currently, with a Democratic-controlled House, it may be more realistic to strive for bills that include 100% renewable propane. However, that presents another issue: the industry currently does not have the capacity to produce that on a large scale yet.

“We will undoubtedly be spending a large percentage of our September executive committee meeting discussing advocacy strategy on renewable propane,” Kaminski said.

Elizabeth Manning is the editor of Butane-Propane News.

Safety
Study Finds Proper Use of PPE Is a Common Challenge
Research from J.J. Keller & Associates on PPE obstacles, repeat violations & how to encourage proper use in your workforce
Beyond the Mains
Key Insights From Gray, Gray & Gray’s 2022 Propane Industry Survey
The current propane climate according to your colleagues
Equipment
Truck Special: Future-Proofing King Amidst Ongoing Market Challenges
For service trucks, transports & other propane equipment, manufacturers reiterate the importance of planning ahead
Beyond the Mains
Get to Know Michelle Bimson Maggi, 2022-23 NPGA Chair
The VP of law at AmeriGas and first female NPGA chair talks plans for leadership & propane's path forward
Western Propane Gas Association Names Colin Sueyres President & CEO
Executive to help propane industry chart a path for generations to come