Building Fuel Infrastructure for the Future Skip to main content

Building Fuel Infrastructure for the Future

The $80 billion global propane industry takes pride in being a great solution for a wide range of applications and in being a cleaner fuel than many fossil-based alternatives. However, industries must continue to innovate as regulations, customer demand, the macroenvironment and technology change. Global governments are enacting regulations to move the world toward carbon neutrality (e.g. Fit for 55, US-IRA).

Recognizing the need to evolve in this changing world, trade associations are making bold moves, such as the Western Propane Gas Association, which announced its goal of reaching 100% renewable propane in California by 2030. The global propane industry has the opportunity to lead the world in providing lower carbon intensity (CI) blended propane products today — much like ethanol in gasoline has achieved in the past — and be the infrastructure for renewable hydrogen in the future.

Lowering CI: An Important Task, But Not an Easy One

While propane is cleaner than many alternatives, the industry has a large footprint due to its size. Collectively, our 85 million tons of propane per year consumption results in an estimated 327 million tons of CO2e emissions in the United States alone.

While this is a challenge, this also means the industry can make a substantial contribution to the environment as it moves toward lower carbon intensities. So, how do you do this? It is all about your starting point — the feedstock.

Energy markets are big, so it is important to look for role models wherever possible, especially when considering large-scale changes. As noted previously, ethanol plus gasoline is a mature example that has proven that blending a renewable and lower-carbon fuel into a fossil-based product within the existing infrastructure can be successful.

More recently, for both diesel and aviation fuel, advances are being made by making low carbon or renewably sourced alternatives that are blended in with their fossil counterparts.

U.S. production of biodiesel is projected above 2.3 billion gallons this year, and renewable diesel alone is expected to reach 5.1 billion gallons per year by 2024 if all projects come online as intended. These fuels reduce greenhouse gas emissions by at least 50% compared to conventional diesel. Drop-in sustainable aviation fuels (SAF) are now on the rise, with several leading U.S. airlines committed to making 3 billion gallons available to carriers by 2030.

These examples show the potential for petroleum-based fuels to change over to more sustainable alternatives quickly given the growing demand for sustainability and improved technology and economics. We can see accelerated adoption where supportive mandates or credits exist.

Now, a key thing to note in these markets is that the new options are more sustainable versions of the product they are replacing. Can propane see a similar switch?

Renewable or Bio-Propane: Starting the Journey 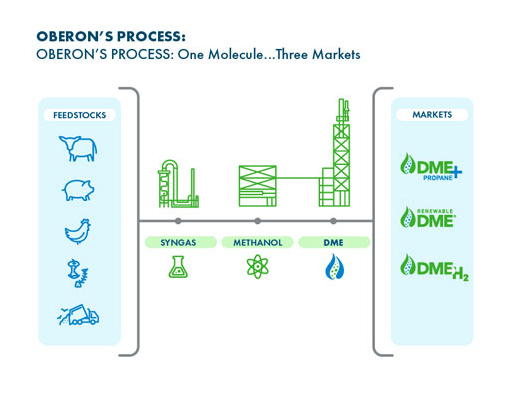 The introduction of renewable or bio-propane in recent years is an important step in the propane industry’s decarbonization journey. The World Liquefied Petroleum Gas (LPG) Association has studied multiple pathways to renewable LPG production and determined that renewable LPG can meet up to 50% of the global, nonchemical LPG demand by 2050.

Yet, there are still challenges with regards to technology development, the creation of intermediates during production that are more valuable than renewable propane and getting producers on board with isolating the product. Industry analyst NexantECA dove into exactly this issue in a 2022 article partially titled “the problem with on-purpose bio-propane.”

Specifically, NexantECA looks at using renewably sourced dimethyl ether (rDME) as a blending agent. Chemically similar to propane, rDME can be blended with propane at up to 20% by weight without notable impact on the supply chain. Such rDME can be made from a range of feedstocks — wood and food and agriculture wastes — creating more production opportunities.

To make rDME from biogas, Oberon uses a three-step process that breaks down the biogas, assembles it into methanol and then dehydrates the methanol to form DME. Each step is based on established processes in the chemical industry. Typically built at large scale, Oberon has engineered modular plants that match the facility to the size of renewable feedstock sources, enabling both local production and large-scale projects to integrate with global markets. The CI of DME will vary based on feedstocks and many other factors. In one example, the California Air Resources Board assessed the rDME produced by Oberon Fuels from dairy waste as having a CI of -278. rDME can also be combined with propane and renewable propane to further drive down the CI of a blended fuel.

Using the example in the table above, we see a striking potential reduction in the CI of (rDME blended) propane of about 60%. While that does not take propane down to net zero, it is a large improvement. Further reductions are possible if renewably sourced propane is blended in. These two parallel approaches to achieving industrywide carbon neutrality offer a third option: propane + renewable propane + rDME.

The industry is catching on to this premise. At the World LPG Association’s LPG Week in 2021, Michael Stivala, president and CEO of Suburban Propane, said he considers rDME and its suitability for LPG blends as “a real game changer” for the industry. NexantECA calls DME “the most reasonable on-purpose propane substitute from an economic standpoint” and a “bridge to the future.”

An increasing amount of commercial milestones are making this real: Oberon began the first ever commercial production of rDME in May 2021; Suburban Propane is now selling a propane and rDME blend commercially to customers in California (disclosure: Suburban Propane is an investor in Oberon Fuels); and Dimeta has announced plans for six plants over the next few years. It is plausible to project that leading propane firms will look to work with firms like these to begin market trials leading to widespread demand for the rDME needed to decarbonize a substantial portion of their total sales in the years to come. Early adopters have the opportunity to position themselves as leaders in sustainability and differentiate themselves from their competitors and other energy sources.

Rarely does an incumbent industry have an opportunity to evolve in substantive ways to stay ahead of competitors, regulations or innovation. But the LPG industry can address all three by further embracing rDME.

How? By unlocking the potential of renewable (“green”) hydrogen.

Broadly speaking, propane companies are great at moving molecules for de-centralized applications — and have fleets of trucks, tankers, terminals and operations skills to match. Because DME is loaded with hydrogen (as we like to say, “DME is a better hydrogen carrier than hydrogen itself”) and can be moved and stored like propane, DME offers propane companies a turnkey opportunity to play a major role in unlocking the fast-expanding hydrogen economy.

So as the propane industry embraces rDME to reduce emissions, it also is paving the way to enabling the safe, efficient and cost-effective distribution of hydrogen — helping chart a path to growing the value and impact of the industry for many years to come.

Rebecca Boudreaux, Ph.D., is president and CEO of Oberon Fuels. As a Ph.D. chemist, she started her career developing more effective cancer treatments and has spent almost two decades leading early-stage companies and bringing new products to market. Oberon is the first company in the world to commercialize rDME as a straightforward way to both slash the CO2 emissions of the huge propane industry and transport renewable hydrogen more efficiently and cost effectively. The company has secured partnerships with and/or investments from industry leaders, including Suburban Propane, Lipigas, SHV Energy, Volvo Trucks, Mack Trucks and Ford. Dr. Boudreaux can be reached on LinkedIn.

The Road to Renewable LPG