Tuesday, February 14, 2017
Ken Wood of Wood Propane in Lytle Creek, a remote location in Southern California’s San Bernardino mountains, takes simple steps to keep his facilities safe in the event of a fire. But he believes his safety preparation saved his company’s locations from worse damage when in September 2016 the Cajon Pass forest fire burned in his area for several days and resulted in evacuations and some destroyed homes. Although Wood Propane lost a bobtail cab and chassis and a box truck filled with equipment as a result of the fire, simple steps helped the small propane company avoid more serious damage. The business’ safety measures prevented damage to its tank storage location that contained about 140 new and refurbished propane tanks.

“The reason for our success on the tanks surviving this enormous forest fire was that we simply removed all the fuel from the tanks,” said Wood, who runs the company with his wife Merri, daughter Karly, son-in-law Frank, and two additional employees. The business serves about 1500 residential customers.

Wood noted that a fire needs three elements to survive: fuel, oxygen, and heat. He uses the fuel removal method because, “I can’t eliminate oxygen. We all need to breathe, and I don’t have enough water or mechanical power to apply the water foam to remove the heat, because the walls from a forest fire are 100 to 200 feet tall. This one moved at 40 mph. The amount of energy required mechanically to stop that is virtually impossible to put together, and that’s why they couldn’t stop this forest fire.”

“To make that problem go away, you need to physically remove the fuel,” he continued. “That’s how you do it. It’s really that stupid simple. If you don’t want it to burn, make damn sure nothing is around it that can burn. That’s it.” He added that weed abatement is the only other method he can use to prevent fire damage. “We’re in a rural area. There is no such thing as ‘prevent fire.’ That doesn’t exist. What does exist is to endure the fire. That has to be the mindset and mentality. So with the tank farm, there is never a doubt that the area is going to burn. There is no stopping it. So you have to be prepared for it to burn, and when it does, you survive it like we did.” 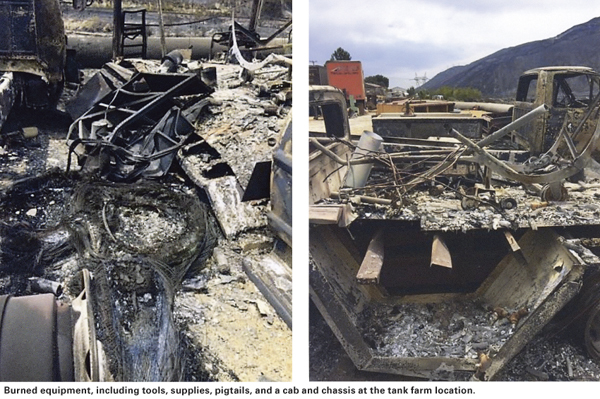 Wood’s experience in dealing with fire and insurance companies can serve as a lesson for propane marketers on how early preparation before a fire occurs can help marketers avoid unnecessary damage and expense. One Wednesday morning this past September as he was running errands with his wife, Wood became aware of the fire by seeing a cloud of smoke. He operates his propane business out of his home, so he rushed back there, where he learned the fire started about a mile from the tank storage location. The storage location received a delivery of 80 additional tanks a few days prior to the fire. All of the tanks survived with no damage at all.

But the old bobtail that the business kept for parts, as well as the box/service truck that was filled with regulators, copper lines, tank valve parts, and various tools and pieces of equipment, were destroyed. Wood said his insurance company, Energy Insurance Services (Scottsdale, Ariz.), and its representative, Bruce Thompson, came through with strong service after the fire. 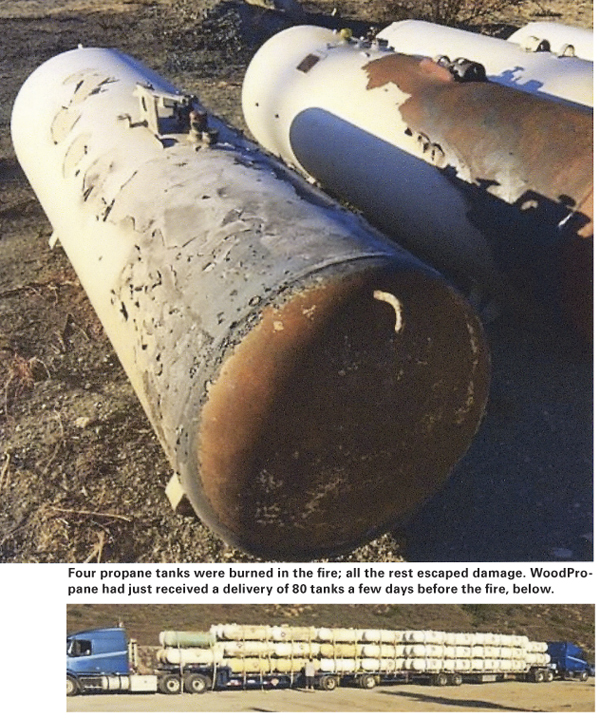 However, preparation by the two men before the fire was crucial. “In Ken’s situation, we spent a lot of time, and probably to his chagrin, dialing in what is in Ken’s yard,” Thompson stated.

Thompson went on to explain that a propane marketer’s insurance program typically consists of three parts: commercial auto, which covers bobtails, transports, boom trucks, pickups and any other vehicles; general liability, which covers liability other than vehicles; and property, which he noted is the least expensive portion of a propane marketer’s insurance program. But because property is a less-expensive aspect of insurance, propane marketers tend to overlook its importance. Marketers should spend as much time documenting the property in their yard, or “yard and yard contents” in insurance language, as they do with the other two portions of insurance. A bulk plant propane tank would cost about $170,000 to replace if it was destroyed, so the dealer should make sure the insurance would cover that tank.

When documenting their assets to insurance companies, some marketers might note that they own a $150,000 building with $20,000 worth of contents. Thompson notes, “If you really want to dig in, do you have a fence on your yard? The fence is not included in generic property coverage. You’ve got to actually write that chain link fence in.” Many marketers store equipment in outdoor metal sheds but don’t think to add that equipment to the insurance coverage. When Thompson talked to Wood about covering the metal shed in his yard, Wood’s initial response was that he did not think it would be seriously damaged in a fire. Asked at the time about the contents in the shed, Wood characterized it as “just a bunch of brass fittings and parts,” Thompson noted. “Well, in this case, something happened to it, and he was covered.” After itemizing the shed’s contents with Wood beforehand, the dealer realized the value of the materials was about $20,000. Wood’s preparation with Thompson to itemize the equipment in the company’s outdoor metal sheds and other equipment in the yard paid off after he also lost some yard equipment in the fire. The property insurance coverage cost Wood about $200 a year. 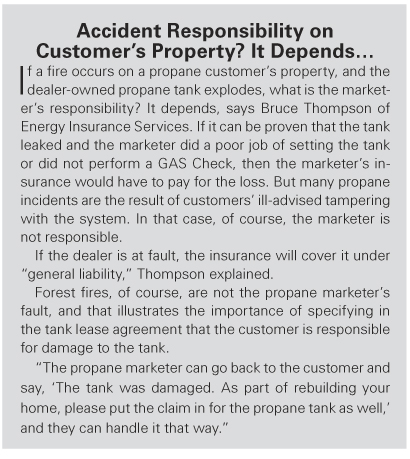 “Unless you jog their memory, they just say, ‘It’s just a bunch of bits, who cares?’” Thompson explained. “But if you want to install those valves and fittings, you’ve got to go to Teeco or someone else and buy brand new stuff to fill his shed so when he sets the tank he can go in there and grab his inventory in order to set tanks. So we talked a lot about what is in those sheds and anything lying out in the yard, because everything has to be detailed to the underwriter. If it just says ‘building and contents,’ they’re only going to cover the building and what’s inside and that’s it.”

In addition to sheds and their contents, propane marketers should inform their insurance agents of everything on their property, including tanks, plumbing, and piping. If the marketer is unable to add language to the tank rental agreement that makes the customer responsible for property damage to the leased tank, he or she should insure the tanks under inland marine/mobile equipment coverage, which is insurance for property off-premises, typically used to insure items such as tractors or trenchers.

Thompson serves other propane marketers who have not been as fortunate as Wood. One California marketer lost about eight propane tanks in a fire several years ago. Losing eight tanks at $400 apiece is expensive but manageable. However, that marketer also lost a 1000-gal. autogas dispenser tank for a loss of about $10,000. The marketer had no coverage for that tank. “That made him revise everything,” Thompson said.

For fires on the customer’s property, as well as those affecting marketer-owned materials not on the customer’s property, preparation is key. Wood was grateful that Thompson pushed him to prepare in advance. After the fire occurred, Wood was pleased with the insurance company’s response. He called in his insurance claim about a week after the incident.

“They saw what our immediate needs were and gave us a check for approximately $4000 to replace anything we would need right away,” Wood said. “Then they came back and did a pretty thorough search and took pictures and took a complete inventory of everything that was destroyed. At that point, they issued us a check for another $8000. They said they would process the rest of the claim and paid me a great sum of money.” Another plus: His insurance rate did not increase as a result of the fire.

Thompson of Energy Insurance Services, who served as chair of the Western Propane Gas Association two years ago and whose insurance coverage area includes California, Oregon, Washington, Idaho, Nevada, Utah, New Mexico, and Texas, can’t emphasize enough the importance of early preparation. As an example, he noted that a 250-gal. tank might cost $400, but if you lose 10 of those in a fire, that can be a substantial expense.

“We spend the time upfront, dialing in every single thing he’s got and allowing him to make the choice of whether he wants to purchase it instead of assuming he doesn’t.” Thompson added that Wood’s action in calling the insurance company immediately after becoming aware of the fire was crucial. “But we talked about it beforehand, got everything in, and the insurance did what it was supposed to do.” —Daryl Lubinsky