Monday, January 6, 2020
(January 7, 2020) — The Energy Information Administration (EIA) reviews that propane inventories in the U.S. Midwest totaled 20 MMbbl as of Dec. 13, a total 4.7 MMbbl, or 19%, below the previous five-year average. The agency notes that lower-than-average stocks were driven by both higher consumption and lower supply. A late and wet corn harvest in the region resulted in increased agricultural propane demand while supply was lower because of disruptions to rail shipments from Canada. The situation is similar to the events of winter 2013-2014 when extremely tight propane supplies in the Heartland led to record spot and retail prices. 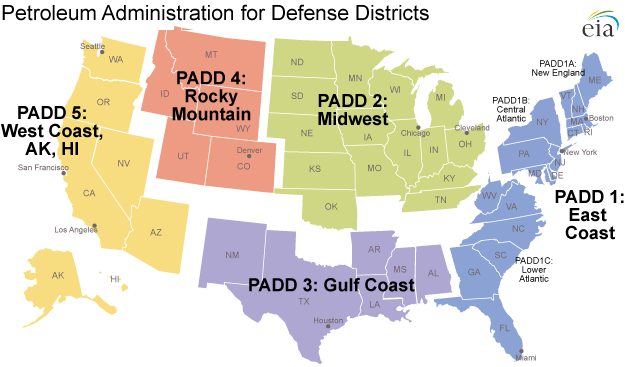 In the Midwest, or Petroleum Administration for Defense District (PADD) 2, propane is used for both agriculture and heating homes and businesses. Regional propane demand generally has two peaks: in the late summer and early autumn for grain drying in the agricultural sector and again during winter for space heating. In some states, such as Iowa and Minnesota, propane consumption during the grain harvest typically nears or exceeds consumption in the peak of the winter heating season.

However, the infrastructure to supply propane to the Midwest from other regions, and to distribute the fuel within the region, is currently scaled to provide steady flows throughout the year—not to meet high seasonal peaks in propane demand. Intra-regional pipelines, originating in the processing and storage hub at Conway, Kan., account for most of the capacity to distribute propane within the Midwest. In addition, rail shipments from western Canada and some limited pipeline capacity bring supplies from other regions. As a result, local inventories, which build in low-demand summer months and draw down in high-demand fall and winter months, act to balance the market.

Retail propane markets in the Upper Midwest, such as Iowa, Minnesota, Wisconsin, and Michigan, especially rely on supplies shipped in from other areas. As such, local storage at the secondary and tertiary levels—such as storages operated by small retail distributors and end-user storage tanks—determine immediate availability of propane to the local market. Therefore, inventory refilling activity during the summer is just as important to the region’s ability to meet heating-season demand as winter weather patterns.

Further, the corn harvest is one of the largest drivers of agricultural demand for propane in the Midwest. For corn to be stored it must first be dried, either by leaving it in the fields to dry naturally or by using large-scale dryers that are often fueled by propane. If corn harvests are large and the weather is wet, propane demand may surge. If local propane inventories are lower than normal going into the second period of peak propane demand for residential space heating, the supply chain can become strained, resulting in shortages and higher prices.

In 2019, corn planting was delayed as a result of cold, wet weather in the spring. Thereafter, cooler summer weather resulted in a later-than-normal harvest and grain that had a high moisture content. According to the U.S. Department of Agriculture, this year’s corn crop was postponed by about three to four weeks compared to normal and only reached maturity in northern Midwest states by about the first week of November, which was the latest since 2009. Wet, cool temperatures during the harvest required accelerated drying in commercial dryers, rather than drying in the field.

The late harvest, which in late December was still ongoing in some states, meant demand for propane from grain drying overlapped propane demand for space heating. This resulted in larger-than-normal drawdowns of propane in the Midwest late last year. Between the week ending Oct. 4 and the week ending Dec. 13, Midwest propane stocks fell by 7.0 MMbbl, compared with the five-year average draw of 2.6 MMbbl for the same time period.

Furthermore, a strike by unionized workers at Canada’s largest rail operator, CN, put additional pressure on Midwest propane markets in November. The strike halted rail movements of propane from western Canada into the Midwest between Nov. 19 and Nov. 27 when harvest-related propane demand was highest. Although the trains are now moving, the one-week delay in real shipments impeded the ability of Midwest retailers to rebuild local inventories after the steep harvest draws earlier in the season.