Pat Thornton
Monday, July 13, 2020
The propane wholesale supply situation is well-known for its twists and turns. Over the past couple of decades, the U.S. moved from being a net importer of propane to a net exporter of propane as numerous shale plays in the U.S. made propane abundant for U.S. retail propane marketers. As production capacity ramped up, millions and millions of dollars were put into building up export capacity. New export terminals and refrigeration facilities were built in the Gulf Coast as well as on the East and West Coasts. The Panama Canal was widened to accommodate larger ships and more pipelines in the U.S. were reconfigured to move propane rapidly toward the export facilities. Exports remain essential to propane markets as they function to balance supply and demand, continuing to facilitate the dramatic increase in production seen over the last decade. 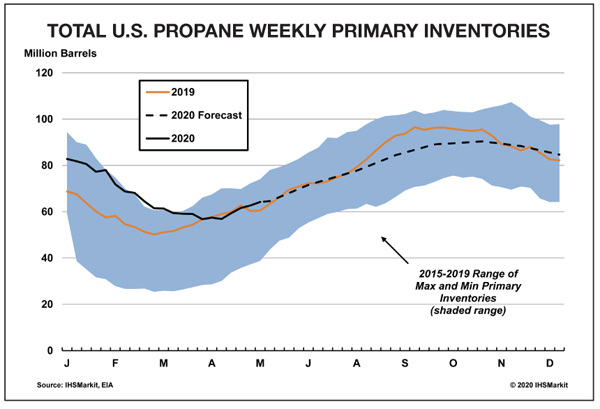 CHANGES IN PRODUCER/WHOLESALER APPROACH
However, the winter of 2013-14, which saw huge distribution challenges in the U.S. and dramatic price spikes for several weeks, was a wake-up call for marketers to know very well their supply situation and have contingency plans. As more years passed, the higher volume of exports kept marketers’ attention. As some long-time wholesale suppliers became more focused on moving high volumes of propane to export, retailers began to find these companies less concerned about meeting their needs. In our January 2020 issue, Marty Lerum, managing partner at Propane Resources, told BPN, “Some producer/wholesalers are opting out of doing small contracts and spot loads for retail propane marketers. This puts more risk on the retail propane marketer. While we produce more propane than ever before in the U.S., the propane distribution system is actually less flexible to deliver to the retail propane industry.”

Lerum noted that many producer/wholesalers are focusing more on selling larger volumes to larger buyers that will guarantee a rate or return on their investment, leaving more risk on the shoulders of the retail companies. Last winter a series of challenges in the Iowa region left retailers scrambling amid an early cold spell and heavy crop drying demand following a late planting season after flooding. For only the second time in history, the National Propane Gas Association (NPGA), the Iowa Propane Gas Association, and other pipeline stakeholders participated in an alternative dispute resolution procedure with the Federal Energy Regulatory Commission (FERC) that resulted in pipeline operators facilitating additional deliveries of propane into Midwestern markets.

The dust had barely settled on a resolution to Iowa challenges as a page turned into a new decade and more supply challenges for U.S. retailers appeared on the horizon with producer/wholesaler concerns. And then came COVID-19, disrupting life for the entire country and world. While many industries took a huge hit in demand, the U.S. retail propane demand was only mildly affected. 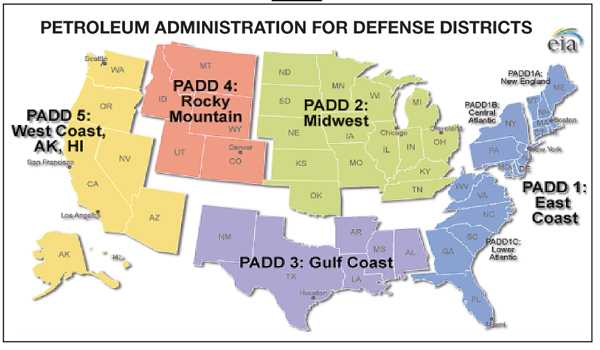 PROPANE PRODUCTION DOWN SIGNIFICANTLY
But no matter how passionate propane marketers are about propane, retailers were reminded on a June 15 NPGA Board Meeting webinar by Steve Kossuth, chairman of the NPGA Supply and Logistics Committee and UGI Corporation’s (AmeriGas’ parent company) vice president of global supply, of propane’s status on the energy food chain: “Nobody produces propane on purpose. As a by-product of natural gas processing and crude oil refining, EIA data shows propane production down by 12% since February,” Kossuth said. “This is a complex time for understanding our market’s fundamentals: production and demand are down; yet, inventories and prices are up. PADD 1 inventories on the East Coast are higher than their five-year averages signaling the market’s belief in supply shortages and storing at current values will ‘pay off.’”

Kossuth noted that there may be more questions than answers about what is in store for the market: 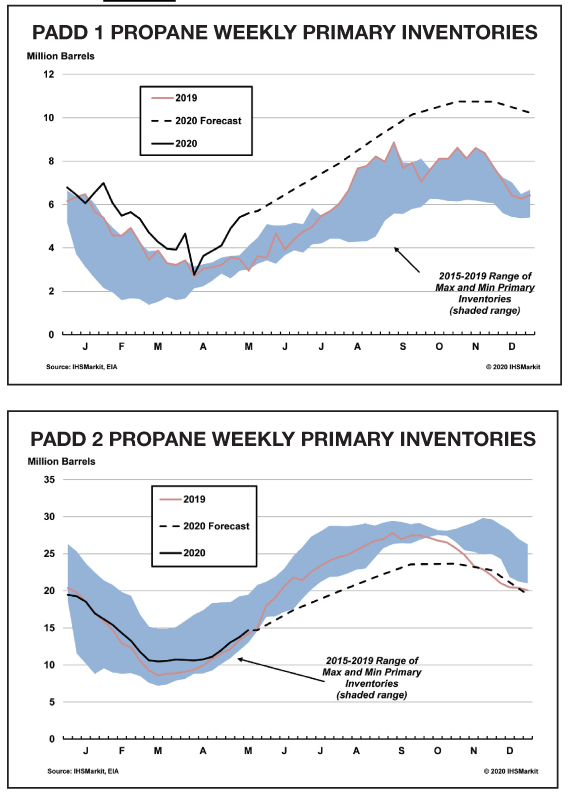 Without the ability to correctly predict the market, Kossuth said that data and education are the best ways to combat uncertainty. “We can learn from our past,” he said, noting the winter of 2013-14 as an example of many lessons learned. “Proactive preparation is the key to success. More diverse opinions and vantage points from our supply chain will allow our membership the best opportunity to accurately assess risk within their specific supply chain.”

Kossuth announced four separate webinars would be presented July through September to educate marketers:
In addition to these webinars, NPGA has made available to members the “Supply Planning White Paper (6/2020)” and the “ABC’s of Supply Preparation.”

BPN spoke with John Powell, senior vice president and head of Kansas City-based Crestwood Services’ Marketing, Supply and Logistics Group, about upcoming challenges for retail propane marketers. “The main issue is production of propane,” Powell said. “With the recent downturn in production due to dramatically lower pricing, rig count across the country is the lowest it has been in years, so the excess supply situation we have all experienced will not be the case going into winter.

“With lower overall U.S. production at both refineries and fractionators, all parts of the country could experience supply shortages if proper supply plans are not made before the season,” he added. “Lines at traditional facilities could be longer than normal and you might find yourself having to drive further distances for reliable supply. This will require everyone to consider some contingency gallons across your operating footprint to ensure adequate supply. Additional storage gallons in local regions—along with contingency plans for propane supply coming from supply locations delivered in by rail or pipe—will require additional planning as those supplies will typically take an extra 30 to 60 days to arrive as well as additional costs.”

As retail firms migrate back to the traditional pipeline source, Buss makes these suggestions: 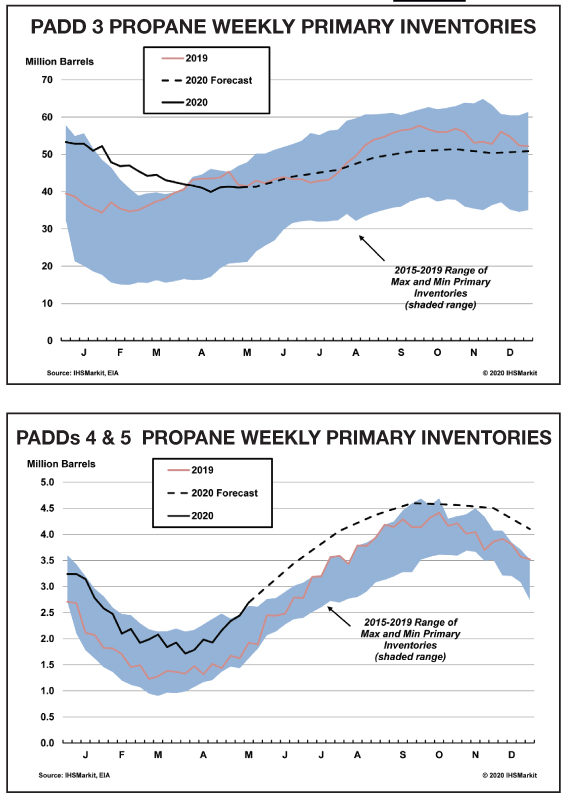 “From March 2020 forward, much of the concern in the propane market has been centered on actual and future decreases in propane supply,” Buss said. “This occurred while domestic U.S. demand in the Midwest to Eastern U.S. began to surge in April and early May; and we saw a short-term burst of global LPG demand from countries seeking to bolster supplies during stay-at-home orders. These two major items worked to generate a rally in propane prices and keep the focus squarely on future supply issues.”

Buss noted that as the famed Paul Harvey would say, “Here’s the rest of the story.” He stated first and foremost that COVID-19 has decimated tourist demand. “Within the North American continent, we see LPG demand in Mexico’s tourist locations suffering huge declines,” Buss said. “On the coasts of the U.S. there are restaurants that are seeing less propane demand. COVID-19 economic impacts also stretch to industrial regions that are or will likely be seeing lower cylinder usage of propane.”

Two counterpoints, according to Buss, to these demand losses are the possibility of increased use for home heat due to quarantine and petrochemical consumption. “Home heat demand did increase in April and early weeks in May in some regions of the U.S. and Canada,” he said. “In fact, if the ‘work-from-home’ model extends further into winter, the home heat demand could rise. The petchem argument however, gets a bit fuzzy when you consider that petchem demand is ultimately driven by consumer demand. If consumers are not purchasing at higher levels, petchem demand may not be as strong. So, one out of two counterarguments could be valid.”

One further concern that Buss acknowledges has not been discussed much is that lower household incomes could generate decisions to use less heat. “Anyone who recalls the follow-through effects of the 2008-09 winter or even the polar vortex of the 2013-14 winter, remembers that higher propane retail prices ultimately led to consumers finding alternative heating sources.”

REGIONAL CONCERNS IN UPPER MIDWEST
Do some areas of the country represent bigger challenges than others? Several supply experts including Anne Keller, managing director of Midstream Energy Group (Sugar Land, Texas), suggested that PADD 2, which represents the area north of Conway up to the Canadian border, is and will likely be undersupplied this winter. “Edmonton pricing had been running at a 26- to 29-cent per gallon discount to Conway, but lately prices have been more even,” Keller said. “The area from Conway to the Upper Midwest has inventory at the bottom of the five-year range.” She cited the movement of more propane out of Edmonton to the West Coast to be shipped overseas, making less available to the Upper Midwest. “The forecast reduction in total supply in PADD 2 would essentially eliminate the seasonal inventory used to carry winter sales that can range from 2.5 to 4 times the gallons higher than summer levels,” Keller said.

Noting that Iowa had supply challenges last year, Iowa marketers and state leaders had a conference call on June 17 to discuss the situation in the region. Jeff Petrash, NPGA vice president and general counsel, was on the call and said that increasing storage was one topic of discussion. “It was considered that state governments in the region should implement a tax incentive for boosting storage levels,” Petrash said.

In a conversation with BPN, Petrash said he has been spending more and more time this year on supply concerns. He stressed that NPGA will do as much as it can to support members in having the information they need to make good supply decisions. “We’ve been getting good information regularly from IHS to share with the membership; our Supply and Logistics Committee has been having monthly conference calls; we’re providing information on wait times at terminals; and we hope members will participate in the webinars July through September.” — Pat Thornton