The Rincon Beach Resort located in Añasco, Puerto Rico, was able to continue its daily operations throughout the catastrophic Hurricane Fiona with a combined heat and power (CHP) unit from 2G Energy Inc. This site utilizes one of 2G’s systems with a generating capacity of 240 kW electrical and 367 kW of thermal energy, generating both the heat/cooling and electricity for the local resort with propane as the fuel source. It is a fully containerized system with “island mode” for built-in resiliency and continuity during blackouts or natural disasters and is rated to withstand hurricane winds, seismic activity, high-salinity environments and the warm weather endured in the Caribbean.

Combined heat and power — also referred to as cogeneration — is an efficient and clean approach to generating on-site electric power and useful thermal energy from a single fuel source. A CHP system increases the efficiency of the energy used in the process of power production (typically between 30% to 35%) to over 90% efficiency. A CHP system is typically interconnected to the utility and operates in parallel with it; but by utilizing on-site generation, customers with critical loads can maintain their operations when the utility grid goes down.

The cogeneration plant at the Rincon resort operates on propane as the primary fuel, but the engine could be retrofitted for other fuel types, such as hydrogen and renewable natural gas in the future.

Propane generation has a number of benefits at the site on the west side of the island. The availability of propane and its long shelf life are major advantages during long-term outages. A site can only be as resilient as the fuel source, so propane can be a great fit at remote or isolated areas, as it is generally readily available from suppliers and can be trucked in and stored relatively easily and without significant fuel infrastructure.

For locations that are frequently affected by natural disasters, a CHP’s island mode can ensure continuity, as the system can operate in isolation from the national or local distribution network. The integration of island mode into a CHP — aside from ensuring a higher resiliency factor — provides a stable power to the facilities. This, in essence, increases the life of various appliances and/or equipment. The transition to island mode can be manual or automatic, depending on the size of the facility and the overall needs. 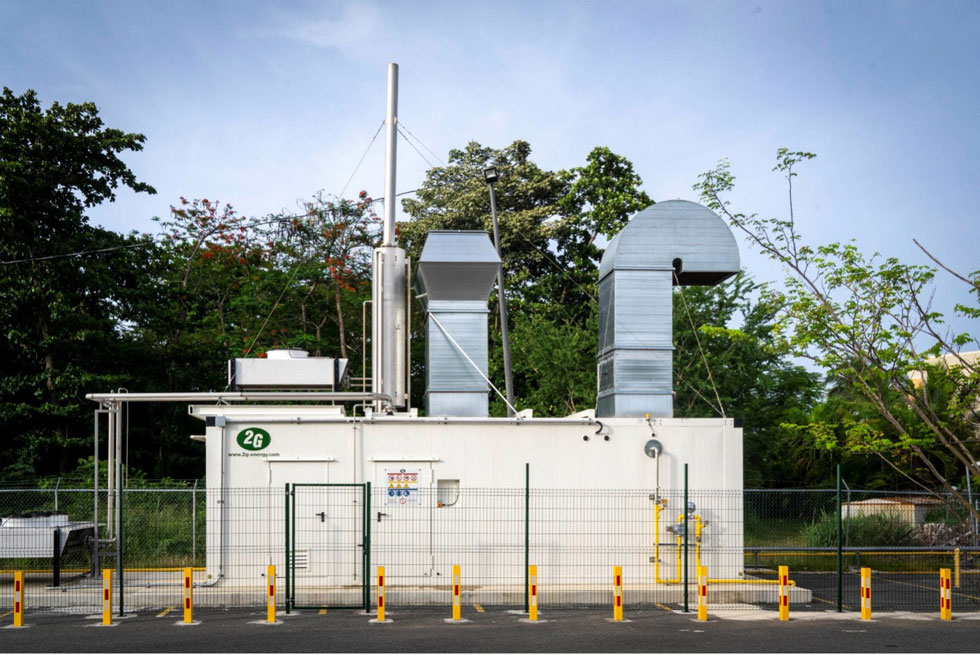 The CHP system is considered to be in island mode whenever the gas engines supply the electricity to consumers without the public electricity grid. Whenever this case arises, the gas engine’s control unit must regulate the frequency, which in turn keeps the revolutions per minute (rpm) constant. The voltage stabilizer integrated in the generator regulates the voltage based on the connected loads. With suitable equipment, CHP systems can establish an island mode (island network) in the event of a blackout in the grid. This can be requested manually or via a control system.

Manual island mode is the simplest and least expensive method of providing resilient power to facilities, as it adds fewer costs beyond the system itself. It is referred to as manual because it requires an on-site operator who has to perform a series of tasks to shift all critical loads to island mode. After the activation of island mode, the facility needs to actively manage and prioritize the loads for efficiency, as manual island mode typically has less generation capacity than necessary to support the entirety of an operational load. This helps to maximize savings while still allowing the facility to support the baseload. Because of these technical limitations, manual island mode is typically used for disaster recovery situations rather than business continuity and is a common choice for large, complex facilities, such as hospitals, large hotels and manufacturing companies.

Automatic island mode is faster and more convenient than manual; however there are some associated requirements for operation. The facility needs electrically controlled circuit breakers, as well as the capability to automatically shed loads. In addition, the generating capacity must exceed the facility’s loads and both baseload and peak loads.

A smaller facility like a supermarket will likely not have a qualified operator to handle the load shed and load add process as required by the manual operation. Single-building sites are best suited for automatic transition island mode because they have relatively straightforward electrical distributions.

2G Energy Inc., a subsidiary of 2G Energy AG in Germany, is a CHP specialist offering cogeneration systems for natural gas, biogas, landfill gas, syngas and hydrogen in the 60 kW to 2,500 kW power range. 2G Energy Inc. is an engine manufacturer and a complete CHP system packager of both its own engines as well as a select few partners. 2G Energy has installed over 8,500 systems worldwide and 150 in North America. The following team members contributed to this article: Kimberley Padro, marketing and events manager; Dan Jones, CEO; Jessie Howell, business development manager; and Adiel Morales Burgos, head of project management.