Sharp Energy Recognized For Its Promotion of Propane Autogas

As a partner of Alliance AutoGas since 2012, Sharp Energy is part of a national network of companies that help fleets transition to propane autogas. These companies deliver vehicle conversions; onsite fueling infrastructure; fuel supply; safety and operational training; and ongoing technical support.

“Since 2013 we have been building out the market for autogas,” Eric Mays, director of sales and marketing with Sharp Energy, tells BPN. “We are continuing to add stations as well as customers to serve from them.”

PROMOTING AUTOGAS
Sharp Energy was recently recognized for these and other efforts by the Eastern Pennsylvania Alliance for Clean Transportation (EP-ACT). Members of this group nominated and selected Sharp Energy to receive the Industry Support Award, which recognizes the company for its “immediate and consistent action in placing alternative fuel vehicles, fuel supply, or technologies on the road within EP-ACT’s territory and for promoting the entire alternative fuel industry.” The award was presented Aug. 13, 2019, at a luncheon in Essington, Pa. 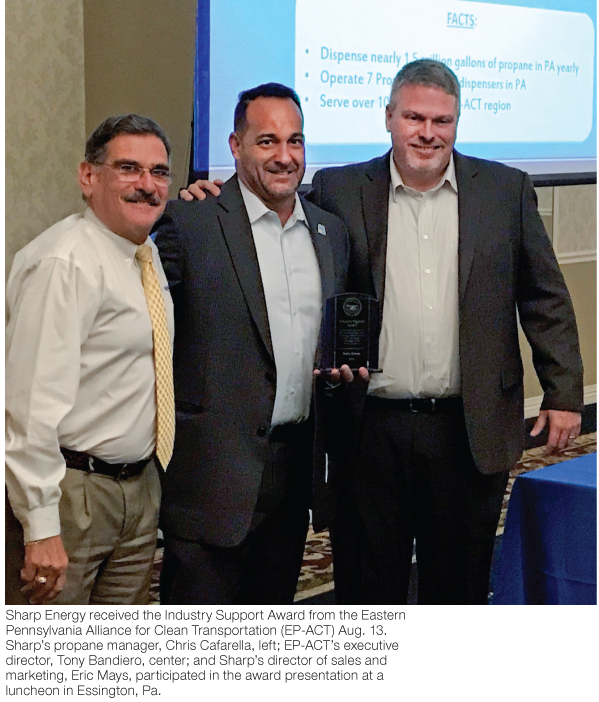 This is the third annual Industry Support Award presented by EP-ACT, and the first to go to a propane supplier.

“Sharp Energy has been a huge supporter of EP-ACT for nearly seven years,” says Tony Bandiero, executive director of EP-ACT. “They were instrumental in helping to get propane shuttle buses around the Philadelphia International Airport. Two companies are currently utilizing propane-fueled shuttle buses to and from their offsite airport parking lots.

“They have been actively promoting propane autogas as an alternative to gasoline and diesel in many industries, including school buses, community shuttle services, package delivery, and airport parking,” he adds. “They have installed eight propane fueling stations within EP-ACT territory and have helped EP-ACT deploy nearly 1000 propane vehicles in our territory.”

BUILDING THE MARKET
Sharp’s first autogas fueling station was a private one providing propane for 13 vehicles at Kent-Sussex Industries. Its first public station was in Georgetown and was used by Sharp’s own fleet as well as the Delaware Transit Corp. dba DART First State, which was conducting a trial of five propane vehicles.

“We have been consistent in building the market in Pennsylvania and in the other states we serve,” Mays says. “We have gone out and developed the business. Autogas has a long selling cycle; it takes time to come to fruition. We have been involved in the fleet side of the business and we support them with grant writing.”

Today, Sharp’s largest autogas customer is DART, which now has 265 paratransit buses running on propane and will eventually have more than 300. DART was one of Sharp’s first autogas customers, starting with the trial of five vehicles through Sharp’s Georgetown station. 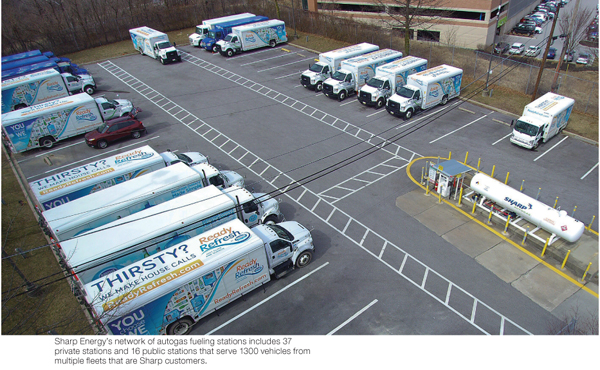 AMAZING SERVICE
“We were first made aware of propane by a very persistent salesman from Sharp,” says Rick Walters, fleet and contract operations director with Delaware Transit Corp. dba DART First State (Wilmington, De.). “He promoted propane very well.”
DART first tried a dual-fuel system on five buses, but the results were so bad, DART had the system taken off. “That’s when Sharp came into the picture,” Walters says. “They sent a technician in to repair the five buses.”

Sharp introduced DART to ROUSH CleanTech. In 2014, DART started a two-year trial using five buses equipped with a ROUSH propane system. “There was not one single fuel system-related breakdown in two years,” Walters reports. “Plus, we saved a bunch of money on fuel costs.”

DART then decided to begin transitioning its fleet of Ford E-450 Cutaway paratransit buses to half propane, half gasoline. It bought 50 propane buses in 2016 and 55 in 2017. Continuing to see reliability and cost savings, DART then decided to begin transitioning that fleet to 100% propane. In 2018 and 2019, it has continued purchasing more than 50 propane paratransit buses per year. By 2021, when the last of the gasoline buses purchased in 2016 and 2017 are replaced, the fleet will be 100% propane. 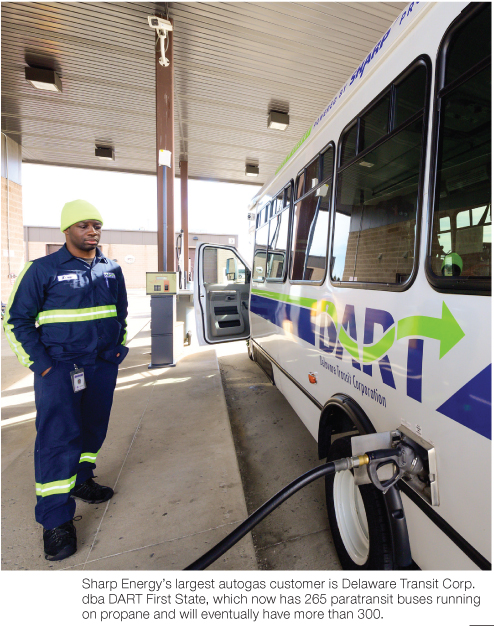 “We couldn’t have done any of this without Sharp and ROUSH,” Walters says. He explained that Sharp has built four fueling stations at DART garages, and is working on a fifth. “Driving to a public station is not cost-effective,” he says. Sharp has also helped DART get funding for these facilities. If a bus runs out of fuel, Sharp sends a truck to refuel it, so DART doesn’t have to send a tow truck. Sharp monitors the propane tanks at DART garages with telemetry, so they don’t run out of fuel. It also maintains the fueling stations, visiting them monthly.

“Sharp has been right by our side the whole time,” Walters concludes. “Their service has just been amazing.”

SHARP’S OWN FLEET
Sharp has also transitioned part of own fleet to propane autogas. These include service trucks, administrative vehicles, sales vehicles, and medium-duty vehicles. The service trucks are on the Ford F-450 and F-550 platforms and have Ford 6.8L V10 engines; some of these pickups were ordered from ROUSH CleanTech and some were aftermarket conversions. Sharp has also converted multiple Ford F-150s and Tauruses utilizing the Alliance AutoGas Prins kits; they have done 3.3L and 5.0L engines in the F-150s and 3.5L engines in the Tauruses. Other Ford conversions Sharp has performed include the 4.6L, 5.4L, 6.2L, and 6.8L engines along with the 3.7L engine in Ford Transits. “Our most recent ROUSH deployment is the Linebacker by Signature Truck on an F-550 chassis,” Mays reports.

The vehicles in Sharp’s fleet that were replaced or converted had been fueled by gasoline. Currently, Sharp Energy has 87 propane-powered vehicles within its own fleet and they displace approximately 155,000 gallons of gasoline annually.

“We cranked up our activities in autogas in 2013,” Mays explains. “We were and are in an NPGA benchmarking group and we heard a fair amount about autogas. Alliance AutoGas approached us, too. We saw that things were maturing enough that we were confident we would succeed.” — Steve Relyea