Wednesday, May 11, 2016
After more than 20 years in the making, an exhibit at the National Museum of Industrial History in Bethlehem, Pa. featuring “The History of Propane” will open this August. The museum will tell the story of America’s industrial achievements and celebrate the accomplishments of inventors, industrialists, and workers, while preserving a record of industry’s advancements from the mid-1800s to the present. Foundations of American industry such as steel, textiles, and of course, propane, will be showcased alongside significant items from the Smithsonian’s Work and Industry Collections. Propane industry artifacts will include the original stock certificates and equipment from American Gasol, the first LP-gas company in the U.S., as well as displays showcasing the modern-day efficiency and various uses of propane. The Ancient Gassers, with major funding from the Propane Education & Research Council (PERC) in addition to the National Propane Gas Association (NPGA) and other companies and individuals, spearheaded the project roughly 20 years ago.

However, some time later, the overall project—unrelated to the propane exhibit—faced financial and legal difficulties that put the effort on hold. The museum, located on part of the former Bethlehem Steel property in downtown Bethlehem, hired a new executive director last year. At the same time, the Young Gassers took over leadership on the project when the Ancient Gassers merged into their organization, creating one unified group for the entire industry. With this new enthusiasm and staffing, the propane exhibit project was back on track.

With this merger, the Ancient Gassers transferred about $100,000 to the Young Gassers to fund and administer the project. Overall, the industry is putting nearly $500,000 into the exhibit, said Jim Renaldo, president of the Young Gassers, and of Renaldo Sales & Service, Inc.

Renaldo, who has been leading this renewed effort with the support of a small group of Young and (formerly) Ancient Gassers, said, “Amy Hollander, the museum’s new executive director, is dedicated to getting the museum up and running this year, and we’re 100% behind her. She has been a dynamic and talented force in this effort and she is as committed to this facility as we are. We think the industry will be proud of the final result.”

Highlights of the propane exhibit include a mock hot air balloon (pictured here), in which museum visitors will get a bird’s-eye view of the entire distribution process, and various end uses. The exhibit will also include rare photos, interactive displays, and educational components. 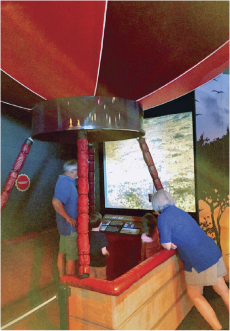 In addition to the original stock certificates, other items on display will include the attaché case and three bottles used by Walter Snelling on his sales trips. Within these bottles is a small sample of the oldest propane in the world. Snelling is credited with being the originator of the liquefied petroleum gas process and the “father” of the propane industry.

Bob Nicholson of Eastern Propane, a leader and passionate supporter of the museum project since its inception, is pleased to see it close to completion. “Finally we’re going to be able to show the American public, definitively, how propane has advanced through the years and is one of the most modern fuels available today. Our exhibit will showcase how versatile and clean it is, and how you can use propane anywhere.”

Rita Pecilunas, president of Strategic Marketing Resources and former vice president of NPGA, has also been involved with the project since its early days. She noted that the enthusiasm and dedication of industry members such as Nicholson and Renaldo, as well as Roland Penta of Phelps Sungas, Joe Rose of the Propane Gas Association of New England (PGANE), and Natalie Peal of BPN, has been nothing short of astounding. “These people have given their hearts and souls to this project. We owe a lot to them for preserving the history of our industry. I don’t think you will find many industries as passionate and proud of their work and heritage the way ours is,” she added.